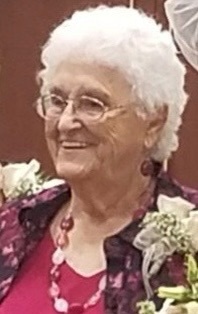 Donna Mae Willemssen, 88, of Breckenridge, MN, formally of Foxhome, MN and Twin Town Villa, was called home by the Lord on Friday, July 16, 2021. Her prayer service will be held Thursday, July 22, 2021, at the Joseph Vertin and Sons Funeral Home at 7 PM, with visitation beginning at 5 PM. Funeral Mass will be held the following day, Friday, July 23, 2021, at St. Mary’s Catholic Church beginning at 10:30 AM led by Rev. Stan Weiser, with visitation held an hour prior. Following the Mass, burial will be at the St. Mary’s Cemetery in Breckenridge. A live stream of the services will be available on the funeral home’s website. Arrangements have been entrusted to Joseph Vertin and Sons Funeral Home.

Donna was born July 7, 1933, to Willis J. Sr. and Rema (Lenzen) Lee in Grand Forks, ND. She attended the Foxhome country school through eighth grade, going on to graduate from Breckenridge High School in 1951. That same year, on July 16th, she married the love of her life, Thaine “Doc” Willemssen. Donna was reunited with him in Heaven on what would have been their 70th wedding anniversary.

As a busy mother of 6, Donna learned quickly how to care for her family and stretch a budget.  As her children left the nest, she and Doc enjoyed traveling to see distant relatives and were active participants in square dancing—for which Donna created many of her and Doc’s matching outfits.

Donna was an expert at knitting, needlepoint, crocheting, hardanger, and tatting; creating beautiful afghans, blankets, scarves, and baby sets, for all her children, grandchildren, and great-grandchildren; as well as making countless knitted items for donation through church drives for the less fortunate.  In her later years, she learned to make jewelry and became a very skilled painter. Along with many friends during her stay at Twin Town Villa, she enjoyed playing cards, bingo, and Wii bowling--a favorite of hers.  She was never afraid to try new things, socializing with others, and making new friends all the time. Technology was more afraid of her than she was of it, and she carried her tablet and iPad with her wherever she went!  Donna knew everyone!  She could recite who they were related to, who they married, who their kids were, and could talk to you for 5 minutes and figure out who you were related to going back decades. She loved and cared for all of her kids, grandkids, and great-grandkids, welcoming them with a big smile on every occasion.

To order memorial trees or send flowers to the family in memory of Donna Willemssen, please visit our flower store.
Open