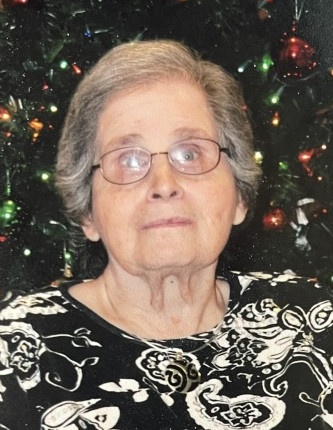 Dorothy was born in Richland County on August 17, 1936 to John and Anna (Jirak) Dozak, the fifth of eleven children, and raised on the family farm near Fairmount.  She graduated from Wahpeton High School in 1954 and began working for a local hardware store soon after.

On June 8, 1957, she was united in marriage to her life-long best friend and companion, Hubert D. Van Cleave at St. Adalbert’s Catholic Church. In 1959, their family grew with their first child, Steven, and soon after followed David and Judith.  The family moved a number of times over these years before settling in Miller, SD, where their fourth child, Kathy, was born.  The family eventually moved back to the Fairmount, ND area in 1979, residing there until 1990 when they moved to Wahpeton.  In 2002, Dorothy was moved to St. Francis Nursing Home where she received loving care for nearly twenty years.

A Den Mother to the local Cub Scout troop, Dorothy was known to be a very loving and devoted mother and later, grandmother.  She excelled at being a stay at home wife and mother.  She was a fantastic cook, baker, and hostess, having an array of bars and coffee ready for guests.  Her home was immaculately clean and well organized and she was always very well dressed, as she wanted to present herself nicely.  Dorothy was very observant, yet reserved and soft spoken.

Dorothy became an expert gardener by absorbing as much information as she could from gardening magazines.  From her bounty, she canned and cooked the best home grown produce.  She was also good at sewing and furniture upholstery.  In her free time, she enjoyed playing cards, doing word searches, watching “Wheel of Fortune”, and playing Bingo when she was able. She loved dogs and especially adored her granddog, Jasper.  In her later years, Dorothy became more and more spiritual and strong in her faith, attending services every week at the nursing home.

She was preceded in death by her parents; her husband, Hubert; her brothers: DuWayne and David Dozak; and her sister, Delores Dohman.

A private family service has been arranged.  Interment will take place at Riverside Cemetery.

The family would like to extend a deep heartfelt gratitude to the loving staff at St. Francis for their years of care and compassion.

In lieu of flowers, memorial donations can be made in Dorothy's name to St. Francis Nursing Home, or to the National MS Society.

To order memorial trees or send flowers to the family in memory of Dorothy Van Cleave, please visit our flower store.
Open