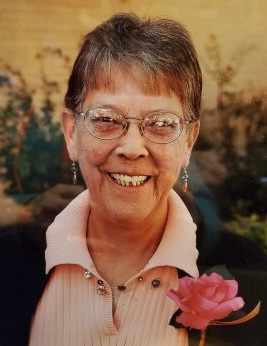 Patricia Ann Lewis, age 75, of Breckenridge, MN, passed away peacefully in the early morning of July 26, 2022, in the care of CHI-Hospice and Twin Town Villa of Breckenridge. Visitation will be held from 2 p.m. to 3 p.m., Friday, July 29, 2022, followed by the memorial service at 3 p.m. at Joseph Vertin and Sons Funeral Home. Collette Barton and Rene Hasbargen will be officiating the service. Arrangements have been entrusted to Joseph Vertin and Sons Funeral Home.

Patricia, affectionately known as “Pat,” was born on July 3, 1947, to Joe and Dorella (Ducoiame) Goulet, in Walhalla, ND, where she grew up and graduated high school in 1967. On August 13, 1971, Pat was united in marriage to Robert “Bobby” Lewis. They lived in Crystal, ND, Mooreton, ND, and made their home in Fairmount, ND. Bob passed away in September of 1993. She then moved to Campbell, MN, until 2005, when she moved to Breckenridge, MN, where she resided until her passing.

Pat worked in the Tare-Lab at Min-Dak for a short time then began working as a cook at Doug’s Bar in Fairmount, ND, from 1991 until moving to Campbell.

She enjoyed visiting with family and friends and watching her children and grandchildren play sports. During her free time, she also loved solving crossword puzzles, word searches, puzzles, playing bingo, and seeing her fur-grandbabies.

She was preceded in death by her husband, parents, five sisters, four nieces, and a nephew.

DUE TO TECHNICAL DIFFICULTIES, THE RECORDING OF THE FUNERAL SERVICE WILL BE MADE AVAILABLE SHORTLY AFTER THE CONCLUSION OF THE SERVICE.

To order memorial trees or send flowers to the family in memory of Patricia Lewis, please visit our flower store.
Open