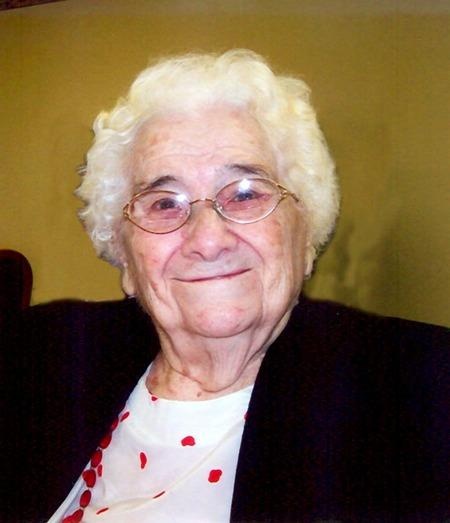 Agnes Schillinger, 102 of Moorhead, MN, died peacefully with family at her side on August 1, 2011 at Eventide Lutheran Home. The visitation is at Joseph Vertin & Sons Funeral Home, Breckenridge, MN, Thursday, August 4 from 5:00 to 7:00 pm with a prayer service at 7:00. The funeral is at St. John's Catholic Church on Friday, August 5 at 11:30 am. Officiating is Father Dale Lagodinski. Interment is at St. Anthony's Catholic Cemetery, Fairmount, ND.
Agnes was born October 27, 1908 to Van and Adelia (Dillon) Beeler near Vermillion, SD. At the age of six the family moved near Doran, MN where Agnes received her education. On November 22, 1928, Agnes married Ferdinand Schillinger at St. Mary's Catholic Church, Breckenridge, MN. They farmed near Campbell, MN. Agnes loved every aspect of farm life. In 1967, they retired to Wahpeton, ND. Ferd died March 20, 1982. Agnes continued to live in Wahpeton. In 1998, she moved to Moorhead into an assisted living facility. In 2004 she entered Eventide Lutheran Nursing Home where she enjoyed playing cards and bingo with her new friends.
Agnes loved to entertain. Her happiest times were with her family and friends and playing cards. She belonged to the VFW and American Legion Auxiliaries, and was proud to be a Gold Star mother in honor of her son, Ferdie who died in the Korean War in 1953. She was a member of St. Anthony's Church, Fairmount, ND and St. John's Church in Wahpeton. Her Catholic faith was a source of great strength for her. Agnes' family wishes to thank the Eventide staff and Hospice of the Red River Valley for the excellent care provided. In lieu of flowers, memorials may be given to your favorite charity.
Agnes is survived by her daughter Shirley (James) Wettstein of Moorhead, MN; her sons Edmund (Janice) Schillinger of Gwinner, ND; Darrell (Emily) Schillinger of Sioux Falls, SD and Thomas (Sandie) Schillinger of Britton, SD; 15 grandchildren; 23 great-grandchildren; 11 great-great grandchildren. Agnes is preceded by her husband Ferdinand Schillinger (March 20, 1982); her parents Joseph "Van" and Adelia Beeler; her son Ferdinand, Jr; her sisters Anna Voss, Tillie Sikorski, Mildred Haag; her brothers Leonard Beeler, Wallace Beeler and Emil Beeler.
To order memorial trees or send flowers to the family in memory of Agnes Schillinger, please visit our flower store.