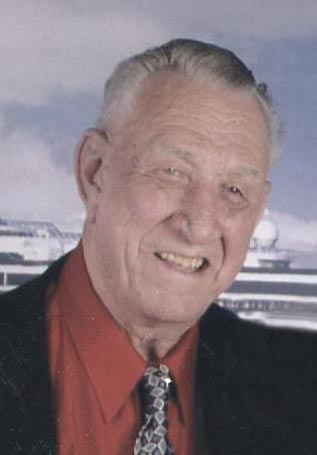 Alfred Richard Klaman, 90 of Fargo, ND, formerly of Wyndmere, ND died April 4, 2013 at Edgewood Vista in Fargo. The funeral will be at 10:30AM Tuesday, April 9 at Wyndmere Lutheran Church with Pastor Bob Caranicas officiating. The visitation will be Monday, April 8 from 5:00 to 8:00PM with the prayer service at 7:00PM at Joseph Vertin & Sons Funeral Home in Breckenridge, MN. The interment will be at Fairview Memorial Gardens at a later date.
Alfred, born October 8, 1922 to Herman and Elsie (Vosberg) Klaman was the fifth of six children to be born on the family farm in Wyndmere. He attended a country school near Wyndmere. Alfred met Marion Eiter at a dance at the Legion Pavilion in Breckenridge. They were united in marriage at St. Mary's Catholic Church on July 11, 1944. They began their life together on the family farm. In 1945 their eldest son Allyn was born. Soon after, Alfred moved his family to Great Bend, ND which is where their daughter Linda and their son John were born. In 1953, Alfred bought a farm of his own near Wyndmere. He was a steward of the land and loved every aspect of farming from watching crops ripen in his field to taking care of his livestock.
Alfred is survived by his 3 children, Allyn (Louise) Klaman of Dickinson, ND, Linda Jensen of Bismarck, ND and John (Kathy) Klaman of Billings, MT; six grandchildren and twelve great-grandchildren; his sister-in-law Dorothy (Eiter) Chase of Watertown, SD; and a special friend Marie Thompson.
Alfred is preceded in death by his parents Herman and Elsie; his wife Marion (d.2001); his sisters Tina (Sylvester)Fettig, Betty (Mac) Farrand, Violett (Marvin) Ritten; his brothers John (Violett) Klaman, and Edward (Ruth) Klaman; one brother-in-law Daniel Chase.
In lieu of flowers, memorials preferred to Hospice of the Red River Valley 1701 38th Street South, Fargo, ND 58103.
To order memorial trees or send flowers to the family in memory of Alfred Klaman, please visit our flower store.