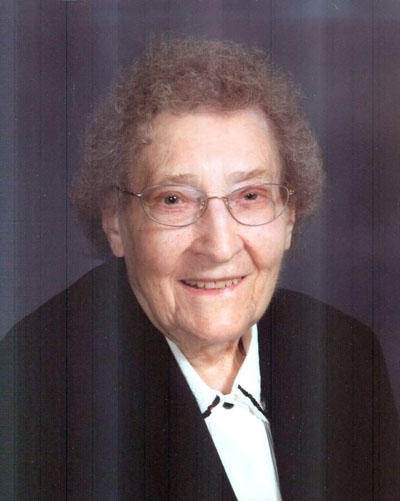 Alice Laura Welharticky, 96, of Breckenridge, MN formerly of Nashua, MN, died Sunday, December 2, 2012 at St. Francis Health Care Campus, Breckenridge, MN. The visitation will be at Joseph Vertin &Sons Funeral Home in Breckenridge, Wednesday, December 5, from 5 to 8:00PM with a prayer service at 7. The funeral will be Thursday, December 6 at Seventh Day Adventist Church, Wahpeton, ND at 2:00PM with Pastor Dragos Profir and Pastor Charles O'Hare officiating. The interment will be at Riverside in Breckenridge.
Alice Laura (Wetenkamp) was born near Zenith, ND July 18, 1916 to Theodore "Ted " and Bertha (Rogahn) Wetenkamp. She attended grade school at Zenith. As a high school freshman, she attended Sheyenne River Academy at Harvey, ND. Her sophomore and junior years were spent at Zenith High School and she graduated from Sheyenne River Academy in 1934. She then took pre-nursing courses at Union College in Lincoln, NE for one year. Deciding to take a different path, Alice transferred to Dickinson State Teachers College, Dickinson, ND. Her goal was to graduate in time to teach in the 1936-1937 school year but many of her nursing credits did not transfer. Through determination and tenacity, she endured summer courses during an extremely hot summer and she achieved her graduation goal, receiving her Teaching Certificate in 1936. She taught for 3 years in North Dakota; first, at the Elementary School in Fryburg, ND where she taught 3rd through 5th grades and then at a school near Amidon, ND. In the spring of 1939, her family moved to a farm near Nashua, MN. Alice taught at the country school, District #38, south of Breckenridge. She met Frank Welharticky, a farmer who had grown up only one mile from the school where Alice was teaching, and they were married October 3, 1940 in Campbell, MN. As a farm wife and mother, Alice worked side by side with Frank on the family farm. She raised chickens, tended a huge garden and milked cows. She served many meals and lunches to workers and friends over the years. She was a marvelous cook and welcomed everyone into her kitchen.
Alice was active in her church. One of her passions was her flower gardens. She had magnificent gardens at the farm; and equally stunning were her flowers that surrounded her home in Breckenridge.
Alice is survived by two sons, Joseph (Geraldine) Welharticky of York, NE and Gary (Florence)Welharticky of rural Breckenridge, MN; a granddaughter Nancy Welharticky; her sister-in-law, Clara Wetenkamp; 2 nieces Viola Redick and Videll Ahrens.
Alice was preceded in death by her husband, Frank (1993); her parents Theodore and Bertha Wetenkamp; and her brother Donald Wetenkamp.
To order memorial trees or send flowers to the family in memory of Alice Welharticky, please visit our flower store.