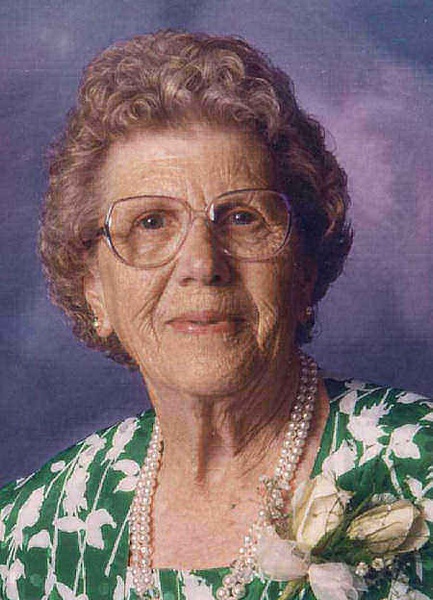 Alma Mehl, 94 of Breckenridge, MN died Monday, January 28, 2013 at St. Francis Nursing Home, Breckenridge. The visitation will be Wednesday, January 30 from 4:30 to 8:30PM with a Rosary at 4:30 and prayer service at 7:30PM at Joseph Vertin & Sons Funeral Home, Breckenridge. The Mass of Christian Burial will be at 10:00AM, Thursday, January 31 at St. Mary's Catholic Church, Breckenridge with Father Peter Kirchner officiating. The interment is at St. Mary's Catholic Cemetery.
Alma was born August 17, 1918 on the family farm 7 miles south of Milnor, ND. She was baptized and confirmed at Concordia Lutheran Church, which had been established on land donated by her great-grandfather, Paul Pederson. Her father, Hans Anderson, had emigrated from Sweden and her mother, Pauline Paulson, was the daughter of Norwegian immigrants. Alma was the second of the Anderson's five children.
Alma attended school at Shumann Number 1. She walked the 2 ½ miles to school. Occasionally in winter, they got a ride in a horse- drawn sleigh. She would often carry a potato in put in the coal furnace for lunch. Life on the farm was filled with work. Alma remembered threshing crews, run-away horse teams, and bulls getting into fights. She also recalled sliding down the barn roof in the winter. Her family and neighbors had house parties for recreation. The dining room at the Anderson Farm became a ballroom when the neighbors got together. Hans loved to dance and taught his children how to do the dances he'd learned in Sweden.
As a teenager, Alma was sent out to work as home help for women after childbirth. She came to Breckenridge in 1935 at age 17 to work for Marie and Bill Larson. She continued to live with the Larsons and worked at Hart's Café, where she met her future husband, Eddie Mehl. She also worked at the Breck Style Shop. In 1939, while Alma was working in Breckenridge, her 15 yr. old sister, Ethel died of encephalitis. On June 22, 1941, Alma became a Catholic and was baptized and confirmed by Father Petermeier at St. Mary's Church. In September, Alma's father, Hans died suddenly of a heart attack at age 49. Alma and Eddie were married on November 25 of 1941. After their marriage, they lived in an apartment above Joe and Kathleen Vertin, who became life-long friends. Around 1946, Eddie began building their new home on Oak Street in Shirley Addition, where Alma has proudly lived since, enjoying the big house with all the memories and the yard with all the birds and animals. They had great friends including their card group, the 39ers, and their neighbors in Shirley Addition.
In addition to raising a family, Alma worked at Sagness Variety Store, Vada's Steak House, The Elks Club, Skogmos, Hager's Shoe Store, and Johnson's Shoe Store, where she worked until her retirement. She was also involved in many activities in St. Mary's Catholic Church. She was a member of Christian Mothers, St. Mary's Guild, served on the parish council, and tied many quilts as a member of St. Martin's and St. Agnes Mission Circles.
On December 26, 1975, a month after their 34th wedding anniversary, Eddie died suddenly of a heart attack. A widow at 57, Alma continued to work and found support and friendship with other widows in the community.
Although Alma preferred to stay home, she travelled to Oregon by train in the 1950's and to California by car in the 1960's. She and Eddie had taken several trips to visit children and grandchildren in Minnesota. Later, Alma traveled by train, plane and automobile to visit Mike in Oregon. She also visited her cousins in Canada. In 1990, Alma and her friend Louise went on an once-in-a-lifetime vacation to Hawaii.
Alma is survived by her six children, Sharon (Ken) Maeckelbergh of White Bear Lake, MN, Ed (Sue) Mehl of Underwood, MN, Cindy (Dean) Hoglund of Rochester, MN, Monica (Frank) Eldien of Warrensburg, MO, Mike (Tosca) Mehl of Medford, OR and Marcia Williams (Craig Raguse) of Fergus Falls, MN; her 16 grandchildren and twenty six great-grandchildren; several nieces and nephews and many friends.
Alma is preceded in death by her parents Hans and Pauline; her husband Eddie; her 2 sisters Rachel Boyer and Ethel Anderson and her 2 brothers Marvin and Albert.
To order memorial trees or send flowers to the family in memory of Alma Mehl, please visit our flower store.