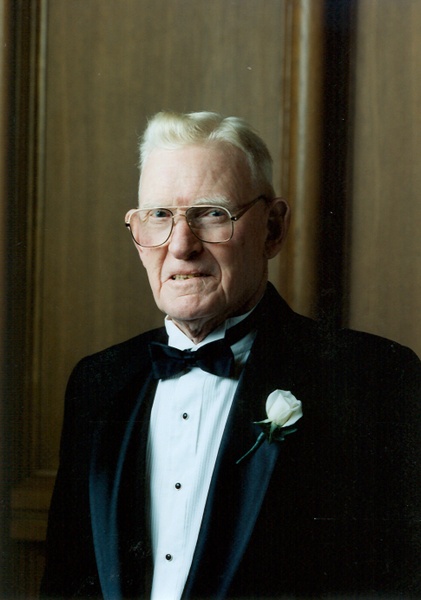 Aloysius J. "Mickey" Nordick, 85, Breckenridge, MN, formerly of Kent, MN, died August 17, 2007 at St. Francis Healthcare Campus, Breckenridge. His funeral will be held Tuesday, August 21, 2007 at 11:00 AM at St. Thomas Catholic Church, Kent, MN with Fr. Kenneth Popp and Fr. Jerry Nordick officiating. Visitation will be Monday, August 20, 2007 from 4:00 PM to 8:00 PM, with a Rosary 6:30 PM and Prayer Service at 7:00 PM at Joseph Vertin & Sons Funeral Home, Breckenridge, MN. Visitation will continue Tuesday morning from 9:00 AM until 10:00 AM at Joseph Vertin and Sons Funeral Home. Interment will be at St. Thomas Catholic Cemetery, Kent, MN.

Aloysius John Nordick was born February 9, 1922 on the farm near Kent, MN, the fourth of nine children born to Henry and Mary (Thuente) Nordick. He grew up on his parent's farm near Kent and attended rural school.

On September 22, 1948 Mickey was united in marriage to Mary Conzemius at St. Joseph's Catholic Church in Brushvale, MN. Mickey and Mary had nine children and raised them on the farm near Kent. After eighteen years of marriage, Mary died on June 28, 1966. Mickey continued farming and raising his children on the farm, retiring in 1983. In 1986 he moved to his home in Breckenridge, where he lived until September, 2006, when he became a resident of St. Francis Home.

Mickey was a very devoted Catholic and raised his family to be active members of St. Thomas Catholic Church in Kent. For many years he was the Chairman of St. Thomas Cemetery Committee. Mickey was also a long time member of the Kent Rod and Gun Club. Following his move to Breckenridge, Mickey was an active member of St. Mary's Catholic Church. He loved woodworking, reading and fishing. His most proud accomplishment was raising his nine children.

To order memorial trees or send flowers to the family in memory of Aloysius Nordick, please visit our flower store.