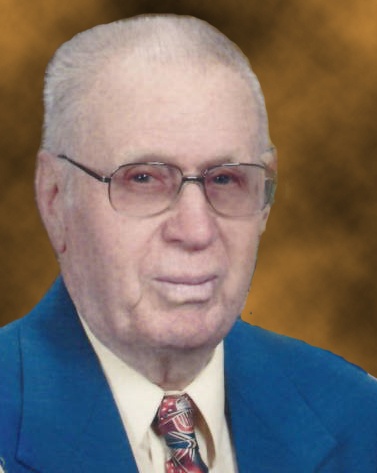 Ambrose passed away at CHI- St. Francis Health Hospital in Breckenridge, MN on Tuesday, May 15, 2018 at age 99 years and 9 months. The visitation will be held from 5:00 p.m. to 7:00 p.m. on Monday, May 21, 2018 at First Lutheran Church in Britton, SD with a prayer service at 6:00 p.m. The visitation will resume at 12:00 p.m. on Tuesday, May 22, 2018 at First Lutheran Church of Britton, SD and will be followed immediately by the funeral service at 1:00 p.m. with Rev. Terrill Sorensen officiating. The interment will be in the Trondhjem Cemetery in rural Veblen. Funeral arrangements have been entrusted to Joseph Vertin and Sons Funeral Home in Breckenridge.

Ambrose Charles Gronseth was born on the family farm in rural Pleasant Valley on August 12, 1918, in the original farmhouse, to Ole A. and Elsie (Syverson) Gronseth.  In October 1918, the family moved into the newly built farm home which remains in the family today.  Ambrose lived on the same farm for 92 years until the year 2010.

He attended grade school at Pleasant Valley #3 and graduated from Britton High School in the class of 1936.  During his adolescence, he assisted his father on the farm raising livestock and crops.  In the fall of 1936, he enrolled in the Minneapolis College of Business for the class year.  He then returned to Britton and began farming with his father Ole and his grandfather Andrew G. Gronseth.  In his younger years he enjoyed bowling, pheasant hunting and traveling around the United States.  In 1951, he met the love of his life, Eleanore Severson.  Many social trips were taken to Watertown, where Eleanore was a special needs teacher with the Watertown Public School System.  They were married in June of 1952 – the first wedding in the “new” First Lutheran Church building.  After a two-week honeymoon to Yellowstone and Salt Lake City they returned to the farm to begin a new life together.

Farming allowed him to continue providing for his growing family while he pursued his interest in business and management, much like his great-grandfather. In the late 1960’s, for health reasons, he retired from farming and became an insurance agent for South Dakota AAA based out of Sioux Falls.  He represented Day, Marshall and Roberts Counties for approximately 15 years making many new friends and acquaintances and establishing a successful insurance portfolio and travel/auto policies.  During this time and in succeeding years, he and Eleanore continued to live on the farm, maintaining and improving the buildings, trees, and land.  They also raised large gardens each year and would often share the fruits of their labors with family and friends.  As a couple, Ambrose and Eleanore were very involved in community and social events including the Marshall County Historical Society, Senior Citizens, Sons of Norway, First Lutheran Church as well as playing cards with many local friends.  They also found time to be very involved with their four sons’ lives and as a result became an integral and cherished part of their eight grandchildren’s lives.  Many road trips were made to Michigan, Minnesota and Mitchell, SD for babysitting and church/school events.  Ambrose was an excellent role model for his four sons teaching them early in life the importance of optimism, faith, hard work, respect for the land, sharing of your time and talents, and gratitude to family and friends.

Following the death of his wife, Eleanore in 2010, Ambrose chose to leave the farm and go live with his son, Tim, in Northfield, MN.  Following Tim’s retirement in 2015, Ambrose relocated to Twin Town Villa in Breckenridge, Minnesota to be closer to his son, Mark.  In May 2017, Ambrose moved to the long-term care facility at the Breckenridge Hospital.  At each of his new homes, Ambrose made new friends quickly and enjoyed playing cards and other social activities.

Ambrose was preceded in death by his parents; his wife, Eleanore; his sisters, Eunice (Mirl) Foster and Sylvia (Craig) Hertsgaard; and his brother-in-law and sister-in-law, Herbert and Corinne Severson.

To order memorial trees or send flowers to the family in memory of Ambrose Gronseth, please visit our flower store.