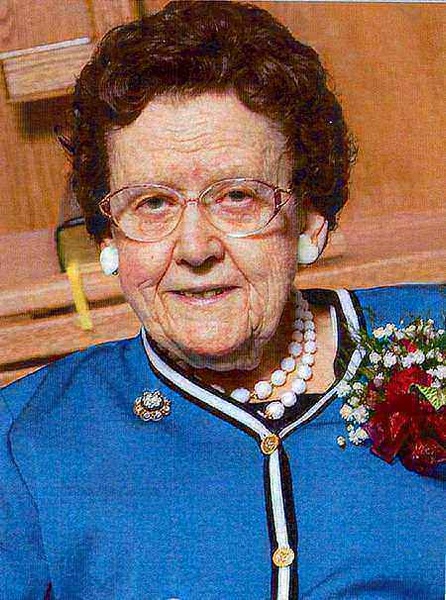 Anna (Annie) Theresa Hoffman, 93, passed away at her daughter's home in Owatonna, MN on Saturday, September 24, 2011. The funeral is October 1, 2011 at 10:30am at St. Mary's Catholic Church in Breckenridge, MN. The visitation is Friday, September 30 at Joseph Vertin & Sons Funeral Home in Breckenridge from 5:00 pm to 7:00 pm with a Rosary at 7:00 and the prayer service to follow at 7:15pm. There will also be a visitation one hour prior to the funeral at the funeral home. Officiating is Father Kenneth Popp. The interment is at St. Anthony's Cemetery in Fairmount, ND.
Anna was born to Peter and Anna (Kloeckner) Muellenbach on August 19, 1918 in rural Campbell, MN. She was the youngest of 13 children. She married Clarence Michael Hoffman on October 25, 1939. They spent most of their life farming in Campbell, MN. They moved to Breckenridge in 1973. In 2003, Anna moved to Owatonna, MN., residing at Park Place , a Senior Facility, where she enjoyed the friends she made along with playing bingo and listening to old time music.
Anna was a lifelong homemaker. She enjoyed gardening, taking pictures of family and friends, playing cards, especially whist, and playing bingo.
Anna will be greatly missed by family and friends. She is survived by her daughters: Anna Homuth and Elaine (Dwayne) Nienaber of Owatonna, MN., and Ilene Gasner of Huntley, IL.; 8 grandchildren, Cheri Ellison, Wade Homuth, Matthew Homuth, Lisa Guess, Amy Gasner, Jeff Gasner, Dan Nienaber, Dana Nienaber; 8 great-grandchildren, Devon and Vince Ellison, Taylor and Bryce Guess, Braden and Jackson Nienaber, Tommy and Andrew Gasner and many nieces and nephews.
Anna was preceded in death by her husband, Clarence, and her siblings: Catherine, Leo, Albert, Al, Peter Jr., Theresa, Jacob, Regina, Paul and Clarence Muellenbach, Margaret Sikorski and Clara Hoffman; and two sons –in-law, Thomas Gasner and Gary Homuth.
To order memorial trees or send flowers to the family in memory of Anna Hoffman, please visit our flower store.