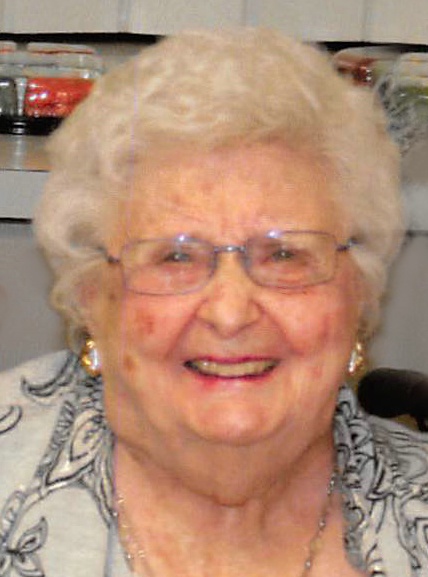 Anna M. Janu, affectionately known as “Ann,” was born on October 31, 1917, the seventh of ten children of August and Barbara (Wildefuer) Janu. She grew up and received her high school diploma at Abercrombie, ND. After her schooling, she worked for various farm families. Ann met her future husband, Frederick Klein while attending dances at Brushvale, MN. They were married at St. Thomas Catholic Church in Kent, MN, on June 14, 1938. Ann and Fritz lived and farmed in Nielsen Township of Wilkin County until they retired and moved to Breckenridge, MN. Ann lived alone after Fritz’s death, then moved to Twin Town Villa, Breckenridge. In June of 2015, she moved to St. Catherine’s Living Center, Wahpeton.

Ann worked at St. Francis Hospital (CHI-St. Francis) from 1971 until 1992. She later continued to volunteer at CHI, the Breckenridge Senior Citizen Center, and at her church until late in her 90’s. She was active in the Wilkin County Homemakers club, St. Mary’s Catholic Church, St. Mary’s Christian Mothers, and St. Agnes Mission Circle. She enjoyed flowers, playing cards, and sewing. She made several quilts for family and friends throughout the years. Ann loved to dance with her husband and together, won many polka contests. She also enjoyed picnics, parades, and spending time with her friends and family. Her favorite sports team was the Minnesota Twins. Secretly, Ann liked fast cars and motorcycles. Ann was known to be a very good cook and was especially known for making apple pies and homemade cake donuts.

To order memorial trees or send flowers to the family in memory of Anna (Ann) Klein, please visit our flower store.