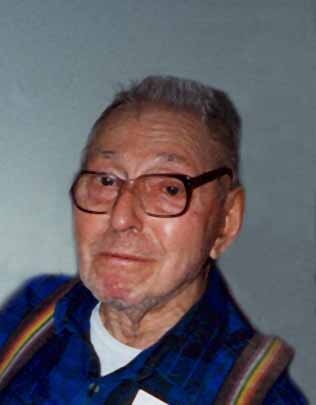 His funeral will be held on Friday, February 29, 2008 at 11:30 AM at St. Mary's Catholic Church, Breckenridge, with Fr. Kenneth Popp officiating.

He is preceded in death by:His wife: Emma A. Theede; His parents: Nickolas and Catherine Theede; and 8 brothers and sisters

Tony was born February 5, 1911 at rural Fairmount, ND the son of Nickolas and Catherine (Bernard) Theede. He grew up on the farm and was confirmed at St. John's Catholic Church in Wahpeton, ND. As a young man he worked on the family farm and later he worked for the railroad out of Breckenridge, MN.

On July 11, 1939 Tony was joined in marriage to Emma Anna Motis at St. Mary's Catholic Church in Breckenridge.

The couple made their home and raised their three daughters in Breckenridge. In 1949 Tony started his own salvage business on Minnesota Avenue. He owned and operated his business for 40 years, retiring in 1989. The couple continued living in Breckenridge in their own home until becoming residents of St. Francis Nursing Home in 2003. Emma passed away December 5, 2003 after nearly 65 years of marriage.

Tony was a member of St. Mary's Catholic Church in Breckenridge and Eagles Club Aerie 2749 in Wahpeton, ND. A highlight of his life was fishing from his pontoon, which he designed and hand built himself. They both loved dancing, socializing and playing cards.

Tony will be remembered for being a proud man who worked long hard hours to provide for his family. He was a man of high integrity who always kept his word.

To order memorial trees or send flowers to the family in memory of Anthony Theede, please visit our flower store.