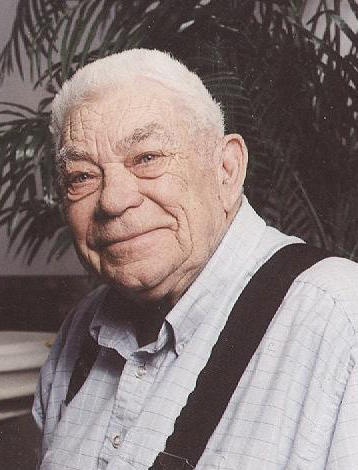 Arnold Van Oort, 88, of Hankinson, ND, died on Friday, November 22, 2013 at St. Francis Nursing Home in Breckenridge, MN. The visitation will be from 5:00 to 7:00PM with a prayer service at 7:00PM, on Monday, November 25, 2013 at Joseph Vertin & Sons Funeral Home in Breckenridge. The funeral service will be at 2:00PM, on Tuesday, November 26, 2013, at United Methodist Church in Fairmount, ND. Pastor Mark Gronseth will be officiating. The interment will be at Lakeview Cemetery in White Rock, SD.
Arnold was born in Hollandale, MN, on December 25, 1924 to Cornelius and Albertha (Neyenhuis) Van Oort. He grew up on the family farm and attended country schools. He helped his dad out on the farm while his brothers served in the military. On November 17, 1945, he was united in marriage to Irene Wieman in Lester, IA. To this union a son and three daughters were born. Irene preceded Arnold in death in 1995. He was united in marriage to Marianne Knoell, on September 20, 1997, at the Church of God in Wahpeton, ND.
Arnold took pleasure in camping, traveling, and playing cards. As an avid fisherman, he spent many happy hours on various lakes and rivers, with his friends and family.
Arnold is survived by his wife Marianne; his son, Ron (Donna) Van Oort of Rosholt, SD, his daughters, Barb (Bob) Daker of Billings, MT, Patricia (Spencer) Haugen of Mooreton, ND, and Pam (Joe) Welle of Pierz, MN; 18 grandchildren, 35 great- grandchildren, and 3 great-great grandchildren; his brother Henry Van Oort of Rock Rapids, IA; his sister, Harriet Thompson of Sioux Falls, SD; Marianne's children, Susan Melby, Julie Sten, Laurel Camp, Clara Marble, ClarEd Knoell, and Lonnie Knoell.
Arnold is preceded in death by his first wife Irene; his parents, Cornelius and Albertha; his sister Jane Burgers, and Eva VanBurkum; his brother, Albert Van Oort; and Ralph and Angie Hagedon.
To order memorial trees or send flowers to the family in memory of Arnold Oort, please visit our flower store.