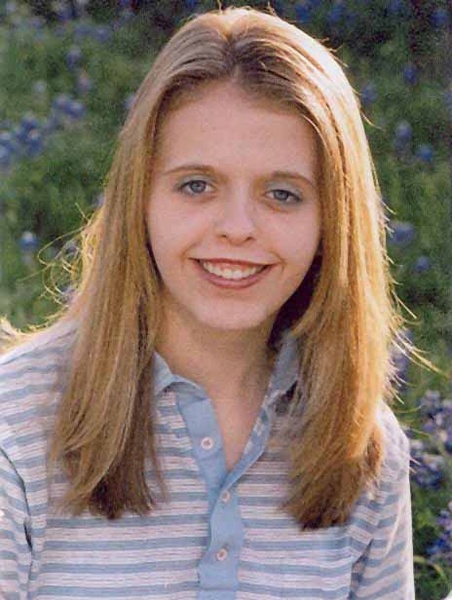 Ashley Nicole Steed, 25, Cedar Park, Texas, died Tuesday, February 12, 2008. The funeral service for Ashley will be held at the United Methodist Church in Breckenridge, MN at 10:00 AM on Friday, February 22, 2008 with Pastor Wendell Kelm officiating. Visitation will be held on Thursday, February 21, 2008 from 4:00 PM to 8:00 PM with a prayer service at 7:00 PM at Joseph Vertin & Sons Funeral Home, Breckenridge, MN. There will also be visitation one hour prior to the funeral at the church. Interment will be at the Riverside Cemetery, Breckenridge.

Ashley was born on Christmas Day, 1982 in Breckenridge, MN to Don Burhans and Teri (Kelly) McDonald. She was raised in Breckenridge until 1991, when she moved to Austin, Texas. She attended Grisham Middle School and Westwood High School, where she graduated in 2001. Ashley took Honor's and TAG courses in high school along with partaking in DECA, and traveling to New York City her senior year. Following high school, Ashley completed general courses at Austin Community College.

Ashley met the love of her life and soul mate, Michael Steed. They were married in a lovely, intimate garden ceremony on June 21, 2003 in Brownwood, Texas. A celebration of their marriage was held in September of that year at her dad's farm in Breckenridge.

In May, 2005, Ashley and Mike made their home in Glorieta, New Mexico, where Ashley worked as an office administrator at Sotheby's International Realty. They lived in the beautiful Santa Fe area until December, 2006. At that time, Ashley and Mike moved back to Austin, the Leander area, and Ashley began working both at Coldwell Banker and United Realty as an office assistant.

Ashley will be remembered as a loving and generous young woman with a big heart for people. Her greatest joy came from spending time with her husband and her family. She has been known to be a hard worker since childhood, where she would give foot rubs with lotion for a quarter. Affectionately, family called her Cinderella. Ashley adored animals, from feeding the barn cats on the farm as a child, to horseback riding to now caring for her own dogs, Jeyda, Katie, and Sherman. She enjoyed playing Texas Hold'Em and wasn't opposed to trying to "beat" her husband Mike at the game at hand. Spending time with children, especially her little brother, Michael, and nephews, Gus and Channing, and her cousin, Brandon were especially happy moments for her. Above all, Ashley found her greatest contentment with her husband, Mike. She enjoyed their time Geo-Caching, walking the dogs, taking their dogs to local dog parks, cooking together, entertaining, watching movies and overall just being together. Every phone conversation ended with, "I Love You."

As a friend, she was a good listener, an encourager, and would keep any secret confided in her. Giving gifts and doing tasks for people were her strengths, and it made her happy just because it made the people she loved the most happy. Ashley was the type of person who would go any lengths for a friend or loved one, with no reservations. Loyal, kind, trustworthy, funny, compassionate, giving, and loved: all these words are what Ashley was and why she will be so sadly missed. Ashley was proud to be a Farmer's Daughter. She was truly beautiful, inside and out.

She is preceded in death by her Grandfathers, Rodney Burhans and Richard Kelly; and by her great-aunt, Patsy Janssen, Great Grandmother, Gina Lillestol and Great Uncle, Stanley "Bud" Martin.

To order memorial trees or send flowers to the family in memory of Ashley Steed, please visit our flower store.