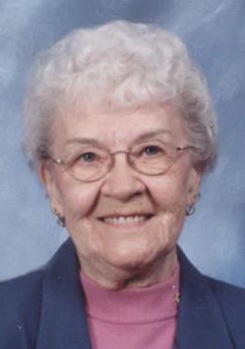 Audrey Hansen, 86, of Breckenridge, MN, passed away on Wednesday, March 25, 2015, at St. Francis Nursing Home in Breckenridge. The visitation will be from 10:00 to 11:00 AM, on Monday, March 30, at Joseph Vertin & Sons Funeral Home in Breckenridge, followed by the Memorial Service at 11:00. Pastor Mark Manning is officiating. The interment will be at Fairview Memorial Gardens in Wahpeton, ND.
Audrey was born on February 17, 1929, to Albert and Emma (Kuchenbecken) Mattson in Hoffman, MN. She grew up and attended school in Elbow Lake, MN, graduating from Elbow Lake High School. Although she was afflicted with polio at the young age of 17, she carried on with determination and courage. Following graduation, she moved to Minneapolis, MN, for a brief period then moved back to the Elbow Lake area where she lived and worked for several years. She then moved to Breckenridge where she was employed as a bookkeeper at Wil-Rich in Wahpeton, ND. On July 3, 1975, Audrey was united in marriage to Harold Hansen in Sisseton, SD. The couple lived in Morris, MN until 1983 and then returned to Breckenridge where they have since resided.
Audrey was an avid reader and was skilled in many different types of crafts. Her hands were never idle as she enjoyed painting ceramics, crocheting, knitting, and sewing. She enjoyed the serenity of fishing. Her home was meticulously decorated for the seasons and holidays, which harmonized with the celebrations of the seasons. Family and friends were welcomed by the wonderful aromas of her delicious home cooking. She valued the time spent with her family and was blessed by a special bond between her and her grandson, Tim.
Audrey is survived by her husband, Harold of Breckenridge, MN; her daughter, Sharon Petermann of Breckenridge; her son, Richard (Deb) Jandt of Breckenridge; her sister Leota Johnson of Crystal, MN, and her grandson, Timothy (Connie) Petermann of Wahpeton, ND and their children, Jacob and Jacie. Audrey is preceded in death by her parents, Albert and Emma; her daughter, Roxanne Sunblad; her sister, Doris Chayer; and her son-in-law, Stan Petermann.
To order memorial trees or send flowers to the family in memory of Audrey Hansen, please visit our flower store.