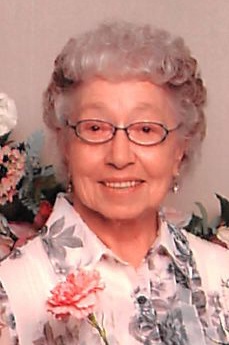 Audrey Marie (Daniels) Kruse, 94, of Holiday Island, Arkansas, passed away Sunday, February 21, 2016, at Eureka Springs Hospital in Eureka Springs, Arkansas. The visitation will be at Joseph Vertin and Sons Funeral Home, from 11:00 AM to 12:30 PM, on Thursday, February 25, followed by the Mass of Christian Burial at 1:00 PM, at St. Mary's Catholic Church in Breckenridge. Father Joseph Backowski will be the Celebrant. The interment will in the spring at Fairview Cemetery in Wahpeton, ND.
Audrey was born September 20, 1921 in Streator, Illinois, daughter of Lester and Violet (Otto) Daniels. She was raised in St. Louis, Missouri. Following her schooling, she went to work as a secretary for Nooter Corporation, a construction firm in St. Louis. She was united in marriage to Richard Kruse, in St. Louis, on June 19, 1948, after a romantic whirlwind courtship. The couple moved to Breckenridge, Minnesota, where they raised their four children and resided for over 50 years. Audrey loved to cook and acquired many treasured and well-used cookbooks over her lifespan. She also enjoyed stitching and embroidered quilt tops for family and friends and crocheted hundreds of bandages for burn patients. She tended many flowers, particularly irises, in her gardens on the farm and later on, enjoyed watching and feeding birds. Audrey looked forward to taking trips, especially traveling with her daughters.
Audrey was preceded in death by her husband, Richard in 2000; her daughter, Donna Tischer, in 2009; and her grandson, Jamie Kruse in 2009. She is survived by her three children, her son, Richard (Denise) Kruse and their children, Keri (Darren) Heutmaker and their children Owen and Noel of Mendota Heights, MN, Jesse Kruse (Jamie's son) of Wahpeton, ND; Eric (Emily) Kruse and their children, Damien, Andrew, and Nathen and of Breckenridge, MN; her daughter, Jennifer (Roger) Wohlwend and their daughter Melissa (Ryan) of Toledo, Ohio; and her daughter, Becki Kruse and her partner, Nancy Kelly of Huntsville, Arkansas; her son-in-law, Doug Tischer (Donna's husband) and their children, Heidi Tischer of Fargo, ND, and her daughters, Samira, Jasmin, and Ariana; and Jeremy (Karensa) Tischer of Breckenridge and their children, Hayden and Sydney.
To order memorial trees or send flowers to the family in memory of Audrey Kruse, please visit our flower store.