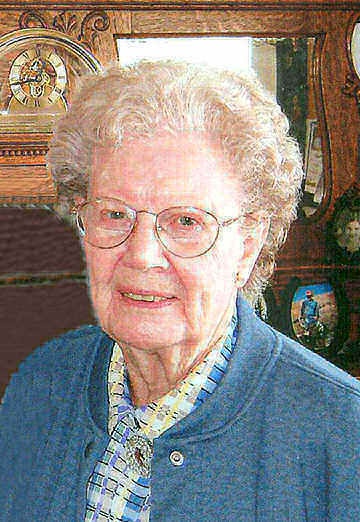 Beatrice "Betty" Dybdahl, 94 of Breckenridge, MN died May 20, 2012 at St. Francis Health Care Campus. The visitation is Thursday, May 24 from 5 to 7 pm at Joseph Vertin & Sons Funeral Home in Breckenridge. The funeral is Friday May 25 at 11:00 am at Grace Lutheran Church in Sisseton, SD. The interment is at the Sisseton City Cemetery, Sisseton.

Betty was born on November 6, 1917 to Ole and Hannah (Huseth) Stensaker in New Effington, SD. She attended school in New Effington except for third and fourth grades when she went to school in Campbell, MN. She graduated from New Effington High School in 1936. In that same year on May 2, she was united in marriage to the true love of her life, Anker "Bud" Dybdahl. Together they made their home and raised their four children on a dairy and agriculture farm northwest of New Effington. They left the farm in 1965 and moved to Sisseton; SD. Anker preceded her in death in 1985. Betty continued to live in Sisseton until moving to Breckenridge in 2007. She was a member of Grace Lutheran Church of Sisseton, the church circle and the church quilters group.

Betty had a knack for making people feel welcome. She always had fresh baked bread and other homemade goodies for friends and family who dropped by to visit. In her spare time, she crafted beautiful embroidery and cross- stitch pieces. Betty always had a kind word to say and will be remembered for her compassion, gentleness and patience. She used her hands for working and helping, and her heart for loving. Her eyes sparkled when she saw her grandchildren. She dearly loved them all. As she became less able to work, Betty became a diligent prayer warrior for others and maintained daily personal devotions.

Betty is survived by her children Grant (Carrol) Dybdahl of Buffalo, Wyoming and their son Lonnie (Veronica) Dybdahl; Dolan (Jerelyn) Dybdahl of Sussex, WI and their sons Brendon (Debra) Dybdahl and David Dybdahl; Clark (JoAn) Dybdahl of Breckenridge, MN and his children Jennifer (Ryan) Schneider and Chad (Christine) Dybdahl and her son Joe (Marci) Sussenguth; and Linda Aadland of Norfolk, NE and her children Dylan and Rachael; 11 great grandchildren and 2 great-great grandchildren.

Betty is preceded in death by her husband Anker (1985); her parents Ole and Hannah; 2 grandchildren Nathan Aadland and Theresa Hultgen; her siblings Oscar, Harry and Cora; and her daughter-in-law Janice Dybdahl.
To order memorial trees or send flowers to the family in memory of Beatrice Dybdahl, please visit our flower store.