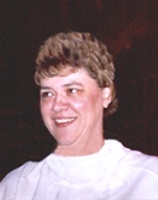 Her funeral will be Saturday, September 20, at 11:00 AM at Joseph Vertin & Sons Funeral Home Chapel, Breckenridge, with Fr. Dale Lagodinski officiating.

Interment will be at , Wahpeton, ND.

She was preceded in death by: Her parents: Theodore “Bud” and Hilda “Gert” Boll and her sister: Kathleen “Katie” Boll.

Becky was born April 15, 1964 in , the daughter of Theodore and Hilda (Martell) Boll. She grew up in Breckenridge and attended St. Mary’s grade school. When she was thirteen she moved with her family to Wahpeton, ND and graduated from in 1982. Following graduation Becky worked at Casey’s Bar in Breckenridge. She also worked for Wahpeton Hockey Association with the charitable gaming.

Becky enjoyed watching football (especially the Vikings), going to the lake, canoeing and observing the wildlife, and playing pool and darts. She was an excellent dart player and had earned many trophies. Becky also enjoyed spending time with her two dogs, Lucille and Snickers.

To order memorial trees or send flowers to the family in memory of Becky Boll, please visit our flower store.