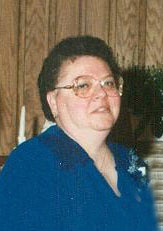 Bernadean Marilla Lancaster, 66, of Breckenridge, MN died at St. Francis Health Care Campus, Thursday June 14, 2012. The funeral is 2:00pm, Wednesday June 20 at Joseph Vertin & Sons Funeral Home, Breckenridge, with a visitation one hour prior to the funeral. Pastor Gary Gottfried is officiating. The interment is at Riverside Cemetery, Breckenridge.

Bernadean was born on August 24, 1945 to William and Luella (Jarvis) Cox in Breckenridge, MN. She grew up and attended school in Doran and Breckenridge, graduating from B.H.S. in 1963. In September of 1964 she was united in marriage to Ralph Lancaster. They lived in Rural Breckenridge until 1978 when they moved to Fergus Falls, MN. She worked at various locations in Fergus and retired in 2003. Ralph preceded her in death on October 3, 1998. Bernadean enjoyed reading, word searches, and spending time with her grandchildren and her lifelong friend Darlene.
Bernadean is survived by her children Randolph (special friend Lynda) Lancaster of Breckenridge, MN and his son Tyler; William Lancaster of Tintah, MN and his children, Dwight and Lee Marie; Calvin (Shannon) Lancaster of Breckenridge, MN and their children Cody, Lacy and Caden; Marlene "Molly" (James) Hamer of Tintah, MN and their children Branigan and Brodie; and her longtime friend Darlene Prochnow.
Bernadean is preceded in death by her husband Ralph Lancaster; her brothers Carl Cox and Charlie Cox and infant brothers William and Bernard; her sister Bonnie Willprecht; her daughter-in-law Colette Lancaster; and her parents William and Luella Cox.
To order memorial trees or send flowers to the family in memory of Bernadean Lancaster, please visit our flower store.