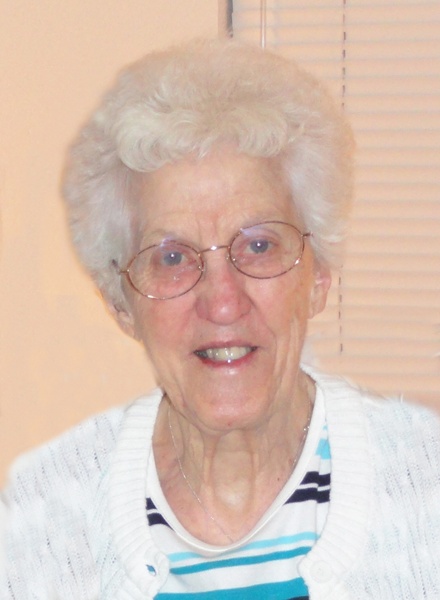 Bernice "Betty" Edwards, 91, of Grand Forks, ND, formerly of Breckenridge, MN, passed away on Wednesday, February 3, 2016 at Valley Memorial Home in Grand Forks. The Mass of Christian Burial will be at St. Mary's Catholic Church in Breckenridge, on Monday, February 8, at 11:00 AM, with a visitation one hour prior to the service. Father Joseph Backowski will be the Celebrant and the interment will be at St. Mary's Catholic Cemetery in Breckenridge.
Betty was born in Farming Township near Cold Spring, MN, one of six children born to Joseph and Cecelia (Backes) Brinkman. Following her graduation from Cold Spring High School, she transitioned to Breckenridge to attend the Nursing program offered through St. Francis Hospital. She graduated from the program as a Registered Nurse and remained in Breckenridge to work as an RN at the hospital. Betty was united in marriage to Orville Edwards on May 13, 1946 in Cold Spring. The couple made their home on a farm just outside of Breckenridge and then moved into Breckenridge in 1967. Betty was a nurse for most of her career at St. Francis Hospital then made the shift to St. Francis Nursing Home where she later retired from.
Betty's strong faith filtered every area of her life. She raised her children by giving them a strong Catholic foundation of love and devotion. She honored her nursing profession with commitment and sacrifice, and cared for her patients with compassion. Even when she retired, she remained purposeful in volunteering at St. Francis Nursing Home. She enjoyed spending winters in Texas and any occasion which meant spending time with her family.
Betty will be dearly missed by her husband of 69 years, Orville of Grand Forks; four children, Dale (Diane) Edwards of Fort Collins, CO, Jo Ann (John) Annen of Elk River, MN, Jon (Mary) Edwards of Detroit Lakes, MN, and Thomas (Colleen) Edwards of Grand Forks, ND; her ten grandchildren and nine great-grandchildren; her daughter-in-law, Michele Edwards of Woodbury, MN; her brother Roman Brinkman of Richmond, MN; her sister, Doris Forbush of Watertown, SD. She was preceded in death by her parents, Joseph and Cecelia; her son, Paul; a brother, Cyril Brinkman; and two sisters, Leona Eichers and Anna Mae Jossendal.

To order memorial trees or send flowers to the family in memory of Bernice Edwards, please visit our flower store.