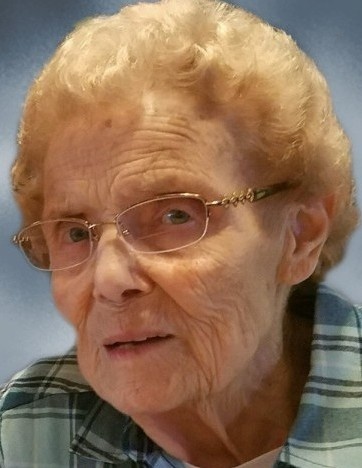 Bernice Delores Gilgenbach was born February 23, 1927, rural Wahpeton, the daughter of Joseph and Rose (Karst) Gilgenbach.  She attended rural school in Dwight Township, and St. John’s School in Wahpeton after the family moved into Wahpeton in 1940.

She was united in marriage to LeRoy “Cappy” Rieber, on August 31, 1948 at St. John’s Catholic Church in Wahpeton.    Bunny resided in their home in Breckenridge until June of this year when she moved in with her sister, Rosemary, in Brainerd.

Bunny was employed with St. Francis Hospital (Housekeeping) for 29 years, she prided herself in this.  She was aslo a member of St. Mary’s Catholic Church in Breckenridge, Eagles Auxiliary of Wahpeton, Brainerd VFW and American Legion for many years.  Bunny enjoyed traveling to family reunions, spending time with friends and going on countless road trips to Brainerd to share memories with family.  She enjoyed fishing with Cappy and taking care of all the produce from their large garden each year.  She was known for her fried chicken and beet pickles. Bunny was small in stature, but large in her abundance of kindness, love and devotion to friends and family.

To order memorial trees or send flowers to the family in memory of Bernice "Bunny" Rieber, please visit our flower store.