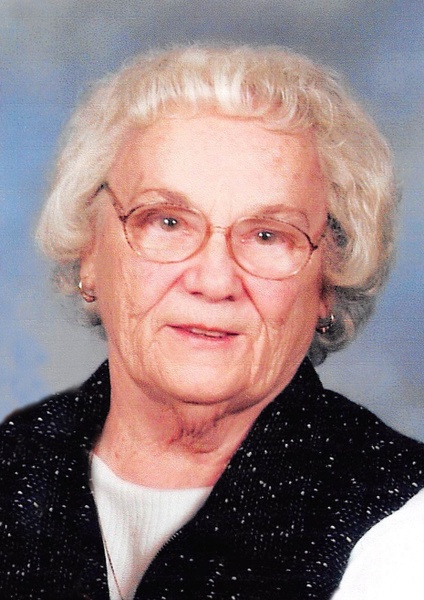 Betty Jean Hulne, 88, of Breckenridge, MN, passed away at Sheyenne Crossing Care Center in West Fargo, ND, on Saturday, June 24, 2017. The visitation will be from 5:00 to 7:00 PM, with a prayer service at 5:30 PM, on Wednesday, June 28, at Joseph Vertin and Sons Funeral Home in Breckenridge, MN. The visitation will continue on Thursday, June 29, from 9:30 to 10:30 AM, at St. Thomas Catholic Church in Kent, MN, followed by the Mass of Christian Burial at 10:30 AM. Father Joseph Backowski will be the Celebrant. The interment will be at St. Thomas Catholic Cemetery in Kent, MN.
Betty Jean Gibson was born in Fargo, ND, on December 29, 1928, one of three children born to John and Dorothy (Chamberlain) Gibson. She attended school in Fargo, and then her family relocated to Tacoma, WA. They returned to ND and she graduated from Christine High School in 1946. On October 29, 1947, Betty was united in marriage to the love of her life, Clarence Hulne, at St. Thomas Catholic Church in Kent. They made their home on the Hulne family farm. She and Clarence were partners in raising their six children and managing the operations of the farm.
Betty maintained a huge vegetable garden and enjoyed canning her harvest. She looked forward to hosting family gatherings, especially during the holidays. Betty graciously served on various committees throughout her decades-long membership at St. Thomas Church. She had a soft spot for most critters and enjoyed quilting, sewing, painting, and was an excellent baker and cook. After she and Clarence became empty nesters, they enjoyed traveling together and playing cards with family and friends. Clarence passed away on December 12, 2016.
Betty will be missed by her six children, Jean Johnson of West Fargo, ND, Michael Hulne of Sheridan, IL, David (Linda) Hulne of Sandwich, IL, Jack (Donzetta) Hulne of Granbury, TX, Dorothy (Sean) Stapleton of Arlington, TX, and Gregory Hulne of Maple Grove, MN; her nine grandchildren and 16 great-grandchildren; her sister, Dodie Drake of Lakewood, WA; her sisters-in-law, Gladys Ritchie of Kent, MN and June Hulne of West Fargo, ND; her brothers-in-law, Joe Hulne of Breckenridge and Donald Krook of Becker, MN; and many nieces and nephews. She was preceded in death by her parents, John and Dorothy; her husband, Clarence; a grandson, Scott Stapleton; son-in-law, Jerry Johnson; and brother, James Gibson.

Betty's Memorial Folder
To order memorial trees or send flowers to the family in memory of Betty Hulne, please visit our flower store.