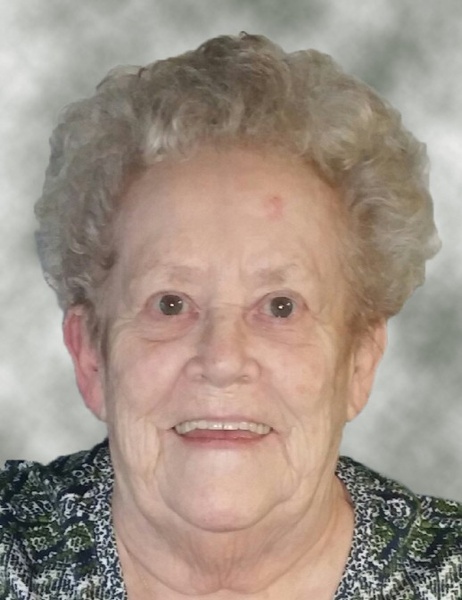 Beverly Jean Holden, 91, of Breckenridge, MN, passed away peacefully at the St. Francis Home in Breckenridge on Sunday, January 2, 2022.

Beverly Jean Johnson (Holden) was born to Marjorie Johnson (Landstad) and Chester Johnson on September 17, 1930, in Fergus Falls, MN.  She attended country schools in Fergus Falls, MN, and moved with her family to Campbell, MN, when she was 13 years old.  She graduated from Campbell High School in 1948 and then went to the University of Minnesota in Minneapolis to study Home Economics.  She graduated with a Bachelors of Science in Home Economics and then went to work for General Mills in their test kitchens.  She married Lawrence Holden in 1954 at the Congregational church in Campbell, MN.  They lived there until 1967 with their two children, Paula and Tim.

Bev was a homemaker who enjoyed cooking, gardening, and canning fruits and vegetables. She also loved reading, playing bingo, and sharing a good laugh.  Above all, she loved God and her family and although she did not live near them in her later years, they were always in her heart.

For most of her life, Bev was active in the United Methodist Church in Breckenridge and a member of United Methodist Women. Bev often befriended people she met with her sense of humor, the ability to laugh at herself, and her desire to care for others.

Bev had many friends who were family to her and was thankful for their love and kindness: Cal and Victoria (Neppl) Hermes; Michelle, Lisa, and Cathy Abell; and Jolyn Dohman. She also appreciated the care she received by all of the staff at St. Francis Home.

Arrangements have been entrusted to Joseph Vertin and Sons, Breckenridge. A private burial will be held in Riverside Cemetery at a later date.

To order memorial trees or send flowers to the family in memory of Beverly Holden, please visit our flower store.