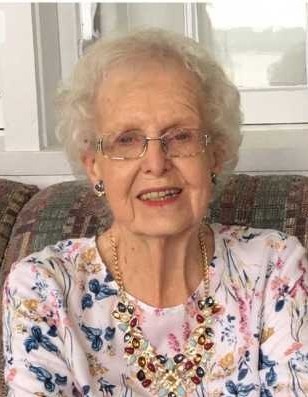 Beverly Karen Komestakes, 88, Fergus Falls, MN (formerly Campbell, MN), passed away surrounded by her family at Lake Region Health Care, Fergus Falls, on Tuesday, May 21, 2019. A "Gathering of Friends and Family" will be held from 5:00 p.m. to 7:00 p.m., Thursday, May 23, 2019, at Joseph Vertin and Sons Funeral Home, Breckenridge, MN, with a prayer service at 7:00 p.m. The funeral service will be held at 11:00 a.m., Friday, May 24, 2019, at Vukku Lutheran Church in Doran, MN. Burial will be held at Vukku Lutheran Cemetery, Doran. Arrangements have been entrusted to Joseph Vertin and Sons Funeral Home.

Beverly was born in Moorhead, MN, on July 26, 1930, to Charles and Florence (Oppegaard) Leerhoff. She grew up and attended school in Moorhead and at the age of 12, began working at the Gopher Grill in Moorhead, MN.  In 1948, she graduated from Campus High School that was connected with Moorhead State College at that time. After graduating, she worked for JC Penney and Northern State’s Power Company in Fargo. During this time, she met the love of her life: Harry Komestakes and after a “short” courtship, they were married on September 21, 1955, in Moorhead. For the next 15 years, they followed Harry’s military career and traveled throughout the world, including military bases in Paris France,  Heidelberg Germany, as well as many throughout the United States.

In 1970, Harry retired from the military and they settled in Campbell, MN, where they raised their family and built lifelong friendships. They made Vukku Lutheran Church, Doran, MN their church family where Beverly was an active member  - as the church and it’s members played an important role in Beverly’s life.   For the last nine years, Beverly has resided in Fergus Falls, MN.

Beverly felt that her greatest accomplishment was her family. Her greatest joy came from spending time with her children, and grandchildren. It was common to hear “It is my turn to sleep with Grandma” and ”Grandma Bev has the best stories!”  Beverly was a friend and caregiver to many -  finding the good in everyone.  Beverly had a servant’s heart which was evident in many aspects of her life. In her spare time, Beverly looked forward to traveling, knitting and was an avid reader. Beverly led a life that taught others to reflect goodness, gentleness, and to always find the positive.  She will be deeply missed by those whose lives she touched.

Memorial contributions may be made to Vukku Lutheran Church.

To order memorial trees or send flowers to the family in memory of Beverly Komestakes, please visit our flower store.