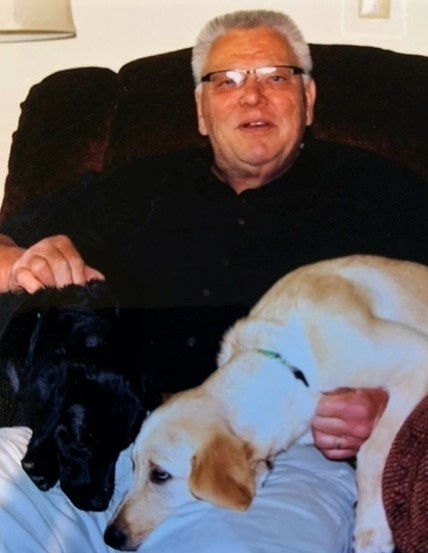 Blayne Helgeson, 81, of Breckenridge, MN, passed away Friday, May 21, 2021, at St. Francis Hospital in Breckenridge, MN, with his loving wife and kids at his side. A Memorial Service will be held at 2 PM Friday, June 4, 2021, at the Breck Lutheran Church in Breckenridge. Rene Hasbargen will be officiating. Burial will take place at Sunset Gardens in Minneapolis, MN, at a later date. A Livestream of his Memorial service will be available on the funeral homes website. Arrangements have been entrusted to Joseph Vertin and Sons Funeral Home.

Blayne Farrell Helgeson was born on July 11, 1039, in Waukon, Iowa.  Later he and his family moved to Milaca, MN where he spent his elementary school years as a rambunctious, adventurous and daring kid.   With so much energy, hockey was his sport of choice, and he was a menace on the ice.  Then he and the family moved to Hankinson, ND, where his father, Grant and his mother, Fern, owned and operated The Hankinson News.  Well over 6’5” as a teen, he was a star athlete on the Hankinson Pirates Basketball team and also played other sports.  Blayne was passionate about his cars and drag racing them against other friends and rivals.   Pheasant hunting in the Sand Hills was also a pastime of choice.  He also was expected to work at the “shop” (Hankinson News) and spent many hours helping his family with the thriving business. He graduated from the University of North Dakota in 1961 with a Bachelors Degree in Journalism.  He landed a job in the Metro area at Shakopee Sun Times and then the North Hennepin Post.

A club membership in “Tip Toppers”, which was an organization for tall people, led him to meeting the love of his life, Carol Goebel, when she went to the paper to place an advertisement and told him that he should join the club.  They went on a date and were engaged a week later, knowing that she was “the one”.  It was a crazy love story that lasted for 58 years!

Blayne and Carol moved to Breckenridge, MN, after their daughter, Sheila was born in Minneapolis, MN; and then son, Tom was born in Breckenridge, MN.  Blayne was a member of the National Guard and transferred to the Wahpeton unit when they moved.  A newspaperman at heart, he worked for the Twin Towns newspapers through all their different names, but most recently the County Press.  To hear Dad running out in the middle of the night or the “fire phone” ringing were commonplace through those years.  In 1974, he changed careers to work at North Dakota State College of Science as the Director of Public Relations.  He enjoyed the college immensely and was often overwhelmed with work, which is how he liked it.  He retired from NDSCS in 2002.

His hobbies and passions included camping with his family, both in a tent and RV, all throughout the United States.  He and Carol loved riding his Honda Gold Wing with the Rough Riders, a local motorcycling club, where he met many life long friends and “salt of the earth” people.  He was an avid sports and music fan, attending sporting events of Breckenridge Cowboys and Cowgirls and the NDSCS Wildcats.   They went to many different concerts in town and out, and also attending WE Fest for many years.  He was called “the Energizer Bunny” by his family as he just didn’t quit when it came to yard work and landscaping.  Woodworking was also a passion of Blayne’s and many of the furniture pieces in his house were handcrafted.  He was accompanied throughout his life by many animals whom he loved wholeheartedly and all were absolutely family members.  He continued writing even after retirement with the various independent projects.  He was an active member of the local Kiwanis Club and served as Secretary for many years.  He also was elected as Lt. Governor of the Kiwanis organization.

He also belonged to the Masonic Lodge and was a member of the El Zagel Shrine.  For several years following his retirement, he was a Speech Coach for the Breckenridge Speech Team, which he very much enjoyed.

Surviving Blayne is his wife, Carol; his daughter, Sheila; his son, Tom and daughter in law, Callie; and his beloved grandchildren; Makenna (Nicholas), Kevin, and Matthew; and his dogs and cats.  He blessed us with his life and left us with a legacy of living life to the fullest.  We will mourn his loss, celebrate his life, cherish his memories and honor his legacy.

In lieu of flowers, donations can be made to the Humane Society of Richland-Wilkin Counties or your favorite charity.

To order memorial trees or send flowers to the family in memory of Blayne Helgeson, please visit our flower store.