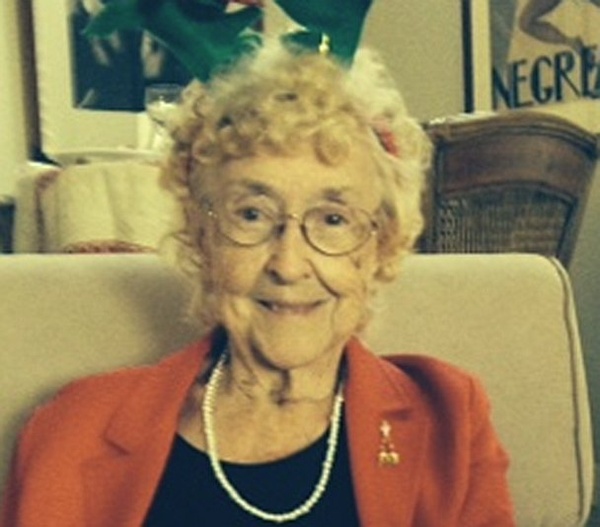 Cebella Beach, age 100, of Cape Coral, Florida passed away on Wednesday, August 25th, 2021. Cebella was born in Amenia, North Dakota, and grew up in Wahpeton, the oldest of three sisters and daughter of Merle and Clara Needham.  She is survived by her son James (Wei) of Lady Lake, Florida and son Thomas (Jean) of Gaylord, Michigan, and grandchildren Paula, Krista, and Laura; nieces and nephews Steve in Colorado and Clair in Indiana; her Japanese exchange student son Hiro; and dear friends Lisa, Mike, Lonnie and many others who knew her. She was preceded in death by her sisters Eleanor (Jim) and Elizabeth (Bob) and her husband Willis (also Bill), with whom she was married for 47 years, and by her niece Vickie and nephew Colin.

Cebella enjoyed performing music with her sisters on radio broadcasts in Minnesota during the late 1930s, singing with beautiful harmonies sacred hymns, accompanying on guitar while Eleanor played the piano. She always sang the middle harmony. She graduated from the Science School in Wahpeton with a degree in secretarial studies.  She later worked as a stenographer in Washington, DC during World War II, where she met her future husband. Bill and Cebella married in 1947 and moved to Saginaw, Michigan in 1952 where they had a full life raising the kids and enjoying the company of friends and neighbors, church and Y camp, and helping with Cub and Boy Scout activities.  Cebella also helped high school-age students from Japan and South America under the Youth for Understanding student exchange program. They left Michigan for warmer weather in Cape Coral in 1980.  She enjoyed having people drop by and watch the boat parade on the canal each December, and the concerts and dances put on by the Shriners throughout south Florida. Her favorite charitable organization was the Harry Chapin Food Bank of Southwest Florida.   A burial service will be held on December 11, 2021, at Riverside Cemetery in Breckenridge where she will join Bill.

To order memorial trees or send flowers to the family in memory of Cebella Beach, please visit our flower store.