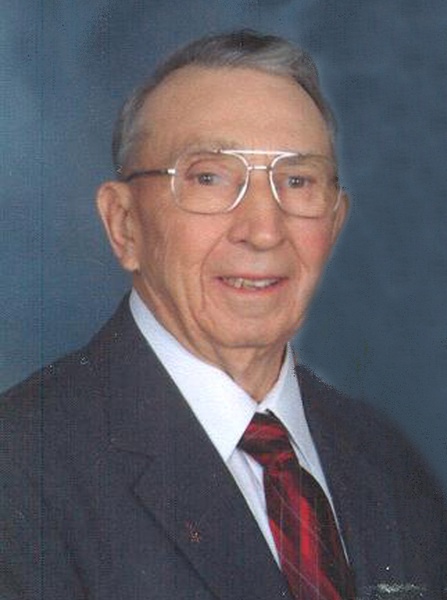 Charles Joseph Krump, 76 of Breckenridge, MN died on September 5, 2012 in his home under the care of Riveredge Hospice. The visitation will be Friday, September 7 at Joseph Vertin & Sons Funeral Home from 4:00 to 8:00PM with a rosary at 6:30 and prayer service at 7:00PM. The funeral will be at St. Mary's Catholic Church on Saturday, September 8, at 11:00 AM. Father Jerry Nordick is the Celebrant. The interment will be at St. Mary's Cemetery in Breckenridge, MN.
Chuck was born to Max and Emma (Dondelinger) Krump on March 10, 1936. He was raised on the family farm near Mantador and attended a one room country school through the eighth grade. Their farm home was the first Catholic Church in the Mantador area. He was united in marriage to Lucille Conzemius on August 28, 1958 at St. Joseph's Catholic Church in Brushvale, MN. Chuck drove bulk truck for Farmers Union Oil Company. He then worked as a carpenter for Ed Larson Construction Company. In 1960, Chuck formed a partnership with Harvey Gorder and started the Gorder-Krump Construction Company. They ran this company for ten years until Harvey's unexpected death on October 28, 1970. Chuck, who liked concrete work better than building, formed Krump Concrete Construction Company, Inc. He owned and operated his concrete business for 30 years gradually bringing his sons Jay and Kevin and son-in-law Terry Petrich into the operations then eventually the ownership of his concrete business. Chuck was especially proud that his four sons and son-in-law all followed in his footsteps in construction work.
Chuck's Catholic faith was extremely important to him. It impacted him as a father, husband and business owner, living out his faith in all that he did. He was a man of admirable character and integrity and known for his quick wit and sense of humor. He never missed a Sunday Mass until his health prevented him from attending. He prayed the Rosary and Divine Mercy Chaplet daily with his wife, and clung to the promise of eternal life awaiting him at the end of this life.
Many memories were made when Chuck and his sons, brothers-in-law and nephews got together for deer hunting. Until 2009, they never missed a season together. He also enjoyed fishing with family and friends; he considered the time spent with family among his most precious treasures.
Chuck is survived by his loving wife of 54 years, Lucille; his daughter, Cindy (Terry) Petrich of Fargo, ND, Wayne (Kerri) Krump of Colton, SD, Kevin (Dianne) Krump of Breckenridge, MN, Gene (Laurie) Krump of Worthing, SD, and Jay (Stefanie) Krump of Breckenridge, MN; 16 grandchildren Ryan (Chelsea) Petrich, Jolynn (Kaldor) Marshall and Brandon; Breanne, Cameron, Jaden, Nikole, Gabriel and Bethany Krump; Brady; Rachael Ruba; Mason Schaefer, Abbigael and Charles Krump; 2 sisters, Cecelia (Vernon) Thiel and Virginia (Joe) Althoff.
Chuck is preceded in death by his parents Emma and Max; his sisters Loretta Thiel, Sister Clare Cecelia, OSB, and Maxine Odness.
Chuck's family wishes to thank Father Jerry Nordick, Fr. Peter Kirchner, Fr. Will Ovsak, Fr. Dale Lagodinski, Fr. Greg Hamon, Fr. Ken Popp, Deacon Doug Campbell and all the faithful who prayed for them during his prolonged illness. Their heartfelt blessings and words of encouragement lifted Lucille and Chuck when they needed it most. They would also like to thank all of the nurses from Riveredge Hospice, especially Cindy Thompson who was always available when needed.
To order memorial trees or send flowers to the family in memory of Charles Krump, please visit our flower store.