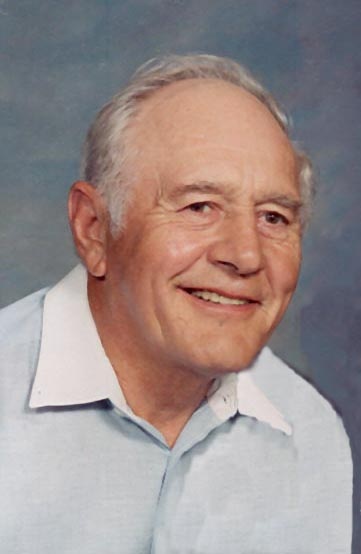 Chester R. Krause, 84 of Breckenridge, MN passed away at St. Francis Hospital on March 29, 2011. The funeral is Saturday, April 2, 2011 at 1:00 pm at Joseph Vertin & Sons Funeral Home, Breckenridge, MN. The visitation is on Saturday, April 2, from 11:00 am to 1 pm., also at Joseph Vertin & Sons Funeral Home. Pastor Ryan Drevlow is officiating the services. Interment is at Riverside Cemetery, Breckenridge, MN at a later date.
Chester was born on April 2, 1926 to Arthur and Mata (Rippie) Krause on a farm near Mantador, ND. He grew up and attended country school and worked for various farmers in that area. He later moved with his parents to a farm near Tenney, MN. On October 29, 1948, Chester was united in marriage to Lorraine Polivka in Sisseton, SD. They lived most of their married life in Breckenridge, MN. In 1952, Chester began a 31 year career at Peter J. Schwietzer/Kimberly Clark Manufacturing as their Mechanic. After retiring, Chester and Lorraine spent six years at the River Ranch near Fergus Falls, owned by their son, Myron, where he enjoyed helping with the horses and maintaining the ranch. He then moved to the Good Samaritan Home in Battle Lake, MN. In 2008, Chester began his stay at St. Francis Nursing Home.
In his leisure time, Chester enjoyed fishing and hunting with his family. His pleasure was his work. He had a strong work ethic and felt a great sense of accomplishment for a job well done. He showed his love by generously helping his children, family and friends. His labor of love was greatly appreciated by all.
Chester is survived by his wife Lorraine Krause of Breckenridge, MN; his children Darlene (Kenneth) Grenier of Breckenridge, MN; Marlene (Roger) Meide of Milwaukee, WI; Myron (Cindy) Krause of Fergus Falls, MN; Darwin (Pam) Krause of Rotond West, FL; his 11 grandchildren Bill, Tina, Mike and Matt; Mariah, AmyAnn, and Aubree; Mandy, Josh, Abby and Danielle; 6 great-grandchildren Victoria, Sheyenne, Taylor, Dalton, Adriella, and Jaydee; his siblings Leonard (Lila) Krause of Fergus Falls, MN; Milton Krause of Fairmount, ND; Loydale (Marcia) Krause of Breckenridge, MN; Gloria Olson of Fergus Falls, MN; his daughter-in-law Angie Nelson of Fergus Falls, MN; his sister-in-law Corrine Krause of Breckenridge, MN.
Chester is preceded in death by his son Danny Krause; his granddaughter Ashley; his parents Arthur and Mata Krause; his siblings Elmer, Melvin, Paul, Violet and Lorraine
To order memorial trees or send flowers to the family in memory of Chester Krause, please visit our flower store.