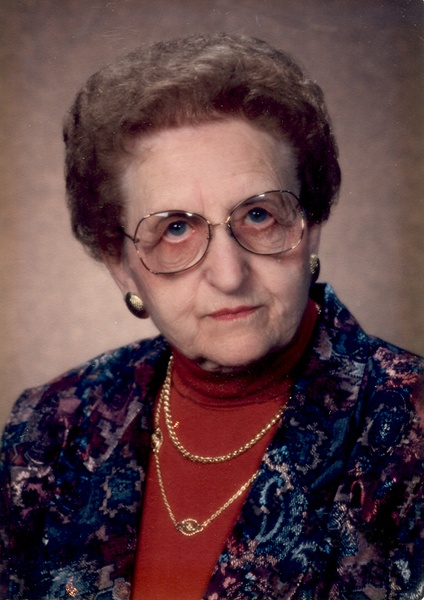 Clementine Connelly, 100, Wahpeton, ND, formerly of , passed away on Saturday, September 20, 2008 at St. Francis Healthcare Campus, . Funeral services will be on Wednesday, September 24, 2008 at 10:30 AM at St. Mary’s Catholic Church, with Father Kenneth Popp officiating. Visitation will be on Tuesday, September 23, 2008 from 5 PM to 8 PM with a prayer service at 8 PM and a Christian Mothers Rosary at 5:30 PM at Joseph Vertin & Sons Funeral Home, . There will also be visitation one hour prior to the service at the funeral home. Interment will be at St. Mary’s , .

Clementine was born on August 20, 1908 in to Joseph and Emilia (Leingang) Lanz. She completed grade school in , and then attended one year of high school in . She then worked in where she was a housekeeper for a family.

Clem was united in marriage to Edward Connelly on June 21, 1932 at St. Mary’s Church in . After their marriage they moved to where Ed was employed with Great Northern Railroad. Clem and Ed raised their three children and during the late 1950s to 1968 she was employed with as a laundry worker. Edward preceded her in death on May 5, 1984 and Clem continued to live in Breckenridge until she entered the Leach Home in Wahpeton, ND in 2006.

Clem was a member of St. Mary’s Catholic Church and the Catholic Society of Lady Foresters. She was very committed to her Catholic faith and was intimately familiar with all the rules and rituals of the church. She also enjoyed playing all types of card games, especially contract bridge. Clem was also a very accomplished cook and no one was ever known to leave her house hungry.

She was preceded in death by her parents, Joseph and Emilia Lanz; her husband, Edward Connelly; her five brothers, Mike, Joe, Bill, Al, and Jack; her five sisters, Ann, Tillie, Emily, Pauline, and Kate and a sister in infancy.

To order memorial trees or send flowers to the family in memory of Clementine Connelly, please visit our flower store.