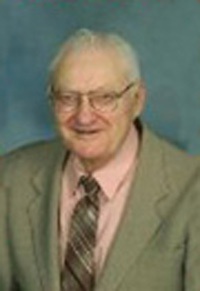 Cliff was born to Charles and Anna (Ujka) Pazdernik on June 27, 1921 in Breckenridge. He farmed along with his father, attending country school a few miles from the farmstead, graduated from Breckenridge High School in 1939 as Valedictorian and furthered his education at North Dakota State School of Science in 1941. Cliff studied Liberal Arts and took flying lessons during his college years, resulting in a solo flight.

He was united in marriage to Gladys Lechleiter on May 22, 1947 at St. Mary's Catholic Church in Breckenridge, MN. They made their home on the family farm south of Breckenridge where they raised their four children and continued to farm the family land until 1970. He then sold insurance for Farm Bureau and the Dakota Farmer Magazine, was a substitute rural mail carrier and drove school bus. In 1975 they sold the farmstead (this is now the Valley Lake Boys Home) and retired and moved to Breckenridge.

Cliff loved music and was a gifted vocalist. He sang with the Alphean Male Chorus and was given the Outstanding Service Award in honor of his years in the chorus. He spent many hours listening and singing along to vinyl records. He enjoyed dancing, bowling and playing cards with friends and family and introduced the game of 'Svik' to his children. This was apparently a game taught to him by his dad and to this day cannot be found on Google. He will be missed by all who knew and loved him.

He is survived by his children, Dana (Linda) Pazdernik of Superior, WI, Deborah (Rick) Jandt of Breckenridge, MN, Kevin Pazdernik (Diane) of Longmont, CO, and Cheryl (Dave) Olsen of Alexandria, MN; 6 grandchildren and 10 great-grandchildren. He is preceded in death by his parents, Charles and Anna, his wife of 60 years Gladys, his sisters Helen, Alvina, Leona and Louise.
To order memorial trees or send flowers to the family in memory of Clifford Pazdernik, please visit our flower store.