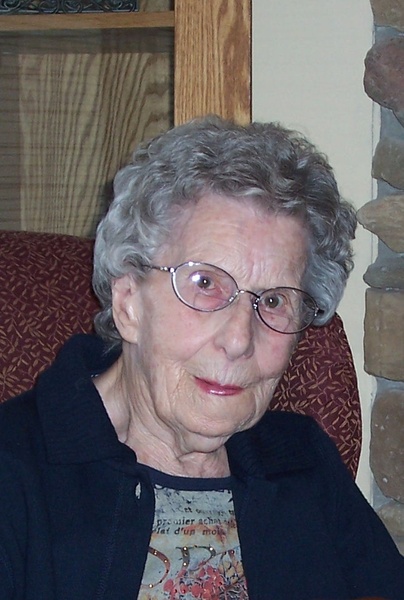 Cludia E. Christensen 93, of Olympia, Washington died Sunday, February 10, 2008. She was born August 12, 1914, at Bell Center, Wisconsin, to Sidney and Maude Vaillancourt. She was their only daughter, the oldest of seven children.

Cludia was united in marriage to Ingward (Ed) Christensen, June 20, 1936. The couple lived and raised their five children in Racine, Wisconsin. They relocated to California in 1969 and later retired in Texas.

Cludia became a resident at St. Francis Nursing Home, Breckenridge, MN in 2005. She recently moved to Olympia, Washington with her daughter, Alica Underberg and Alica's family.

Spirituality, love of family, and companionship of friends, were her passions. She loved to look at pictures and reminisce, play bingo, do puzzles, and she enjoyed needle work, until recent years. Cludia was honored and humbled to be chosen Queen of St. Francis Home in 2006. She enjoyed visiting with the caring Staff and friends she made while living in Breckenridge.

A Funeral Mass for Cludia will be held at St. Helen's Catholic Church in Glendale, Arizona on Saturday, February 23, 2008 at 8:30 AM. Burial will be at approximately 10:30 AM at St. Francis Cemetery, Phoenix, Arizona.

To order memorial trees or send flowers to the family in memory of Cludia Christensen, please visit our flower store.