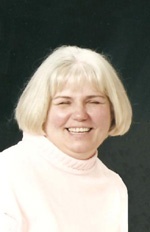 
The Funeral Mass will be held on Tuesday, September 29, at 11:00 a.m. at St. Mary’s Catholic Church, , with Fr. Kenneth Popp officiating.

Corrine was born April 22, 1949 in Wahpeton, ND, the daughter of Herbert and Gertrude (Hingst) Meyer. She grew up in Breckenridge and attended Breckenridge public schools, graduating in 1968. She then attended North Dakota State College of Science in Wahpeton, ND for Nursing.

Corrine moved to to live with her sister, Helen, and work for the Nebco Tackle Company. While living in , she met her husband, Ron, working evenings at the Silver Dollar Restaurant.

Corrine and Ron were married on December 29 th , 1970. They continued to live in on a little houseboat on the Mississippi River until 1973, when they moved to .

Corrine stayed home to raise her two children, until returning to work in 1990 for Sears, where she remained employed until the time of her death.

She enjoyed spending time with her family, and taking her grandchildren to The Pumpkin Patch, Como Zoo and several other places. She especially enjoyed taking them on the Carousel Rides that they would find.

She is survived by her husband: Ronald Woolcott, Saint Francis, MN; Her daughter: Crystal Woolcott and her husband, Chris Loosmore, and their children, Emerald and Ruby, Isanti, MN; Her son: Ronald Woolcott II and his wife, Dawn, and their children, Tiffany, Jacinda and Harley, Cedar, MN; Her step-daughter: Kathleen Woolcott, Minneapolis, MN; Her brothers: Pete (JoAnne) Meyer, Ottertail, MN; and Thomas (Barb) Meyer, Minneapolis, MN; Her sisters-in-law: JoAnn Meyer and Carol Meyer, both of Breckenridge, MN; Her brother-in-law: Arnold Kalb, FL and Elvin Hager, AZ; Many nieces and nephews.

To order memorial trees or send flowers to the family in memory of Corrine Meyer, please visit our flower store.