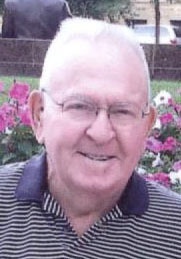 Dale Edward Smith, 77, of Breckenridge, MN, passed away on February 18, 2014, at St. Catherine's Living Center in Wahpeton ND, after a courageous seven-month battle with cancer. The visitation will be from 5:00 to 8:00PM, with a prayer service at 7:00PM, on Friday, February 21, 2014, at Joseph Vertin & Sons Funeral Home in Breckenridge. The Mass of Christian Burial will be at 10:30AM, on Saturday, February 22, 2014 at St. Mary's Catholic Church in Breckenridge. Interment will be at St. Mary's Cemetery in Breckenridge, at a later date.
Dale was born Feb. 22, 1936 in Wahpeton to Ernest & Elsie (Chizek) Smith. He was baptized and confirmed at St. Adalbert's Catholic Church in Wahpeton. He attended elementary school at Center Township in rural Wahpeton, and graduated from Wahpeton High School in 1954. He entered the National Guard, and then joined the U.S. Army in 1956, where he was stationed in Panama City, Mexico. He received many awards, including Sharpshooter (light machine gun), a Good Conduct Medal, Marksman (automatic rifle), Sharpshooter (60mm Mort), and Expert (RR57mm). In 1958, Dale was honorably discharged from the Army and returned back home to Wahpeton.
Dale first worked as a mechanic for the Jack Reed Chevrolet Dealership, and then for short time at Quine Roofing, both in Wahpeton. For the next 37 years (1960 -1997), he worked at Northwestern Sheet & Iron Works, Wahpeton, and Johnson Culvert in Fargo, ND; transitioning from a semi-truck driver to a shop foreman.
Dale was united in marriage to Lois Herding on January 2, 1960, at St. John's Catholic Church in Wahpeton. They lived in Wahpeton for three years before moving the family to Breckenridge; where they raised their five children and are currently living. Dale had a strong work ethic and emphasized the importance of being fair and honest. His legacy of strong character, honesty, and hard work was gratefully received by his children.
As a young man, Dale loved to go hunting and fishing. He received great satisfaction in passing on his love of deer hunting to his children and grandchildren. He also enjoyed working on the family farm near Underwood, MN; and gardening. As a devoted father and husband, what he valued most in life, was the time spent with his family.
Dale is survived by his wife of 54 years, Lois; his children, Kevin (Kathy) Smith of Breckenridge, MN, Steve (Louise) Smith of Savage, MN, Linda (Dale) Madsen of St. Anthony, MN, Debbie (Chris) Kline of Eden Prairie, MN, and Jim Smith of Breckenridge, MN; his grandchildren, Jesse (Tanya) Smith of Maple Grove, MN; Derek (Lea) Smith of Savage, MN; Brandon Smith, Katie Kline, Jacki Kline, Connor Kline of Eden Prairie, MN; Logan Smith, Kayla Smith of Breckenridge, MN; his great- grandchildren, Ryder Smith of Maple Grove, MN, Arlo Birawer of St. Louis Park, MN, and his eagerly-anticipated great-grandchild, of Savage, MN.
Dale was preceded in death by his parents, Ernie and Elsie Smith; his sister, Delores; and his brother, Eugene.
Memorials preferred to the Roger Maris Cancer Center in Fargo, ND.
To order memorial trees or send flowers to the family in memory of Dale Smith, please visit our flower store.