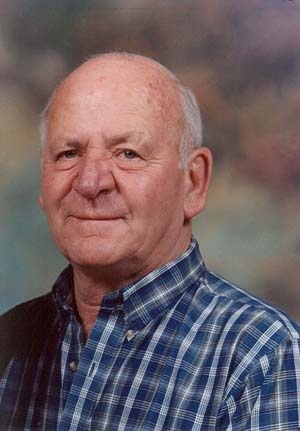 David A. Schillinger, 76, , died peacefully surrounded by his loving wife and family on August 9, 2009, at his home in , after a courageous battle with cancer.

Funeral services will be held Saturday, August 15, 2009 at 1:00 p.m. at Joseph Vertin and Sons Funeral Home Chapel, , with Father Arlie Sowada officiating. Burial will be at , rural .

David Schillinger, a long time resident of , , was born March 23, 1933 in near to Joseph and Anna (Nennig) Schillinger. As a child David grew up on the farm living around the area. He attended country school for three years before attending . After school, David worked for area farmers until he went into the Army in 1956. He served through 1958 and was in the Big Red One, 1 st Infantry Division. David also worked at Abel’s gas station in for several years. In 1965 he started working for the as a janitor and bus driver, where he worked for ten years. In 1975 he began working for the Wilkin County Highway Department as a blade operator until his retirement in March, 1995. During the 40 plus years of living in , David was on the fire department for 33 years.

On May 14, 1959, David was united in marriage to Annabelle Korinek. They made their home in and had three children, Rebecca, Kurt and Debra. Annabelle passed away December 17, 1997.

On April 23, 1999, David married Beverly (Craig) Barton. They made their home in . With this union, the family was enlarged by three daughters, Cindy, Sarah and Rebecca.

Many wonderful family memories were made at Seclusion Point, near Dent, MN and near . David especially loved fishing, and always enjoyed a good search for the illusive “Walter,” a largemouth bass. David also enjoyed camping, a blazing campfire, and a rousing game of dice with . David’s “furry kids,” Willie (Buddy) and Shadow (Squirt) also gave him a lot of pleasure.

To order memorial trees or send flowers to the family in memory of David Schillinger, please visit our flower store.