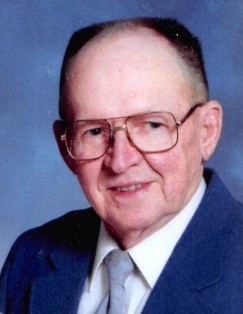 Clayton was born on Easter Sunday, April 20, 1924, to Nels and Hazel (Lehman) Johnson in Tintah. He attended elementary through high school in Tintah and graduated in 1942. He then worked at a saw mill and helped his dad with farm work until he was drafted into the U.S. Army in 1944, of which he served in the Philippines and Japan during WWII. Clayton was honorably discharged in 1946.

On May 7, 1951, Clayton was united in marriage to Audrey Keller in St. Gall’s Catholic Church. The couple resided in Tintah, where Clayton worked for his Uncle on the farm. In 1954 he began working for Bob and Earl Davison until 1958, when he bought a mink farm in Tintah, where the couple raised their 5 children. During the winter of 1970, the snow took his sheds down. Clayton sold his farm and went back to work for Bob Davison, until Bob passed away; then Clayton went to work for the Daniels brothers.

Clayton once served as a Fire Chief in Tintah. He was an usher at St. Gall’s, and also had served on the Church Council and Village Council. He enjoyed woodworking and helping to remodel houses. Most of all, he had a special place in his heart for all of his kids, grandkids, and great-grandkids. He fondly called each of them “buddy”.

He was preceded in death by his parents, Nels and Hazel Johnson; his son, Richard Johnson; and his sister, Lorraine Ponath.

To order memorial trees or send flowers to the family in memory of David "Clayton" Johnson, please visit our flower store.