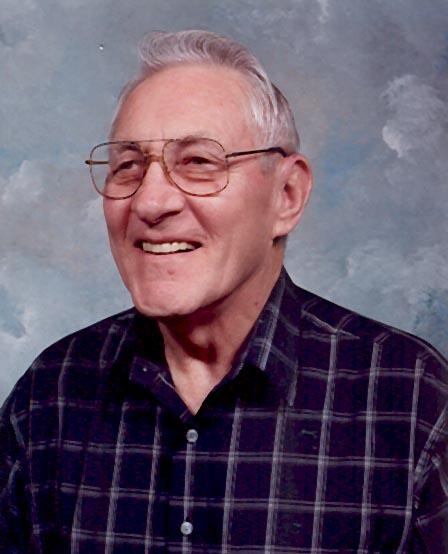 Dick Hiedeman passed away on November 11, 2011 at the St. Cloud Hospital in St. Cloud, MN. The visitation is at Joseph Vertin & Sons Funeral Home on Sunday, November 13 from 5:00 to 8:00 pm with a prayer service at 7:00. The funeral is on Monday at 1:00pm at the Doran Presbyterian Church in Doran, MN with a visitation one hour prior to the funeral at the church.
Dick was born on Feb 23, 1935 on the family farm south of Everdell, MN to Arthur and Ruth (Owen) Hiedeman. He went to country school for the first three years and then attended the Campbell, MN public school. In 1952 Dick attended American Legion Boys State in St. Paul, MN. He graduated in 1953 from Breckenridge Public School. After graduation, he volunteered for the draft and ended up in active duty in Germany, until he was honorably discharged due to the death of his father, Arthur. He then went home to run the family farm. He attended NDSU for a short time in 1956.
On June 22, 1957, Dick was united in marriage to Barbara Ellingson at the Doran Presbyterian Church in Doran, MN. They continued farming until 1969, when he started working for Cenex doing furnace, air conditioning and appliance work. On December 1, 1975, he opened his own business, Dicka�(TM)s Heating.
Dick was active in the Doran Presbyterian Church as a Sunday School teacher and also as a trustee, treasurer and an Elder. He served in various offices as a member of the Eaglea�(TM)s Club and since April of 1995, Dick ran the Eaglea�(TM)s Sunday Night dances. He enjoyed going to his grandchildrena�(TM)s sporting events including football, basketball, and baseball games and also took pleasure in attending their concerts and programs. He was an avid Minnesota Twins and loyal Vikings fan.
Dick is survived by his wife of 54 years, Barbara; his sons Tim (Lila Mart) Hiedeman of Papillion, NE; and Scott (Karla Bakken) Hiedeman of Overland Park, KS; his six grandchildren Mindy (Brian) Kemp of Moorhead, MN; Sandi (Nick) Rustad of Harwood, ND; Todd (Amy Christen) Hiedeman; Ty Hiedeman of Fargo, ND and their mother Coral (Ron) Verhaagen of Campbell, MN; Kendall and Ethan Hiedeman of Overland Park, KS; his three great-grandchildren Emily Kemp, Nola and Wyatt Rustad; his brothers Raymond (Shirley) Hiedeman of Minneapolis, MN; Herbert (Phyllis) Hiedeman of Wahpeton, ND; his sister Ethel Petersen of Breckenridge, MN and his sisters-in-law Monica Hiedeman of Long Prairie, MN and Mae Hiedeman of Breckenridge, MN; his brothers-in-law Bud Johnson of Shelton, WA; Warren Hasbargen of Breckenridge, MN and many nieces and nephews.
Dick was preceded in death by his parents Arthur and Ruth Hiedeman; his brothers George, Russ, Harold, Earl; his sisters Hazel and Cora; his brother-in-law Robert Petersen; his sisters-in-law Julia Hiedeman, Jackie Hiedeman and Mabel Hiedeman.
To order memorial trees or send flowers to the family in memory of Dick Hiedeman, please visit our flower store.