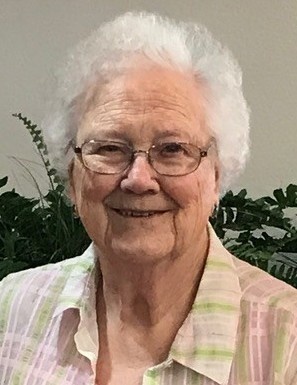 Dolores Helen Holecek, 97, of Breckenridge, MN, passed away at Sanford Medical Center, Fargo, ND, on Monday, February 10, 2020. Visitation will be held from 5 p.m. to 7 p.m., Friday, February 14, 2020, with a Christian Mother’s Rosary at 6:30 p.m. and a prayer service at 7 p.m., at Joseph Vertin and Sons Funeral Home, Breckenridge. Visitation will continue Saturday, February 15, 2020, from 9:30 a.m. to 10:30 a.m., at Joseph Vertin and Sons Funeral Home followed by the funeral service at 11 a.m., at St. Mary’s Catholic Church, Breckenridge. Father Leo Moenkedick will be officiating. Burial will be held at St. Joseph’s Cemetery, Brushvale, MN.

Dolores was born in rural Kent, MN, on August 18, 1922, to William and Mathilda (Nordick) Thuente. She grew up on the farm near Kent where she attended country school, then St. Francis Academy for high school. She then continued her education at St. Francis School of Nursing from 1943-1946 in the Registered Nursing program. She was a member of the V.S. Cadet Nurse Corp.

Dolores worked at St. Francis Hospital in Breckenridge for a short time. She was united in marriage to Bernard Holecek on April 25, 1950 at St. Thomas Catholic Church in Kent, MN. The couple made their home in Breckenridge, where they raised their five children. In September 2006, they moved to Twin Town Villa, Breckenridge. After 60 years of marriage, Bernard passed away on October 29, 2010.

Throughout the years, Dolores was a member of St. Mary’s Catholic Church, Breckenridge, Christian Mothers, Foresters, and Breckenridge Senior Citizens. She had a heart for others and used her talents in quilting, crocheting, knitting, and cross-stitching to bless her friends, family, and mission projects. Her faith in God was woven into the fabric of her life; she was a prayer warrior, constantly praying over her loved ones each day. For fun, Dolores enjoyed puzzles of all kinds, reading, and playing cards. In the summer months, she looked forward to spending time at the lake with her growing family and watching the Minnesota Twins baseball games. Above all, she adored spending time with her grandchildren and great-grandchildren.

She was preceded in death by her husband, Bernard Holecek; parents, William and Mathilda Thuente; brothers, Clarence Thuente and Dennis Thuente; and sister, Marie Thuente.

To order memorial trees or send flowers to the family in memory of Dolores Holecek, please visit our flower store.