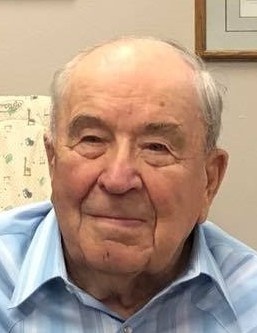 Donald Ernest Bullis, 88, of Tintah, MN, went home to God on August 23, 2020, at Grace Home, Graceville. Visitation will be held from 9 AM to 11 AM, Friday, August 28, 2020, followed by the 11 AM funeral service at the Wahpeton Event Center, Wahpeton. Pastor Kelly Hart will be officiating. Burial will be at Riverside Cemetery, Nashua, MN. Arrangements have been entrusted to Joseph Vertin and Sons Funeral Home, Breckenridge.

Don was born on November 27, 1931, to Ernest and Abby Bullis at their family home. Don was born second of six children and they lived on a farm just East of Tintah. He was baptized and confirmed in the St. Galls Catholic Church and attended Tintah Public School and the West Central School of Agriculture. After his education, Don farmed in the Tintah area.

On June 8, 1950, Don met Charlotte Shuck during a barn dance held at his father’s farm. After a short courtship, they were married on February 3, 1951. They moved to their farm just down the road from where Don grew up. To this union was born five children: Alan Lee, Barbra Lynn, Vickie Marie, Randall Don, and Lucinda Kay.

After retiring from agriculture, he enjoyed mowing numerous places and moving snow in the village of Tintah. There was much that Don could do including carpentry, plumbing, electrical, and mechanics. If it needed fixing, Don could fix it!  If he couldn’t fix it, it probably couldn’t be fixed. Don loved collecting farm toys and belt buckles. He enjoyed watching the birds and the squirrels trying to get into the bird feeder.

They moved into Tintah in 1969 and continued to live there until entering Grace Home in Graceville until Don passed away.

To order memorial trees or send flowers to the family in memory of Donald Bullis, please visit our flower store.