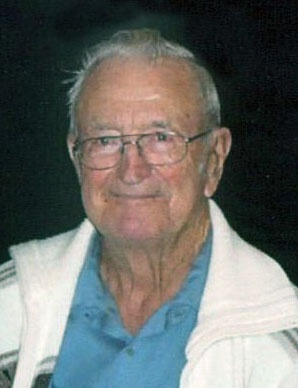 Don was born October 17, 1921 to John and Minnie (Semple) Lechleiter in West Fargo, ND where he grew up and went to school. He moved to the Breckenridge/ Wahpeton community in the early 1940's. He married the love of his life, Ruth Merrick, on June 17, 1947 at St. Thomas Catholic Church in Kent, MN. They made their home and raised their 5 children on the farm southeast of Breckenridge. He semi-retired in 1991, but continued to live and work on the farm through the harvest of 2012.
Always civic minded, Don served on many boards including Breckenridge Township, Wilkin County Fair, Breckenridge School Board, Farm Bureau, and Wilkin County Historical Society. He was also a 4-H leader, an usher at St. Mary's Catholic Church, a member of the Alphean Male Chorus and on a bowling league for more than 60 years.
Don was an influential role model for his children and grandchildren; not just in his involvement in the community, but more importantly the inspiration he was to his family. He was a man of dependable character and a strong work ethic. He embraced technology and used it in his work and play; from the GPS systems in the tractors to the Wii bowling with his grandchildren. He treasured his family. He loved to host family gatherings, playing card games and serving up traditional family meals. Many happy memories were made when friends and family gathered for sing- a- longs, with Ruth playing the piano and Don leading the singing. They traveled extensively, and were fortunate enough to visit 49 of the 50 states, missing only Vermont.
Don is survived by his five children, Linda (Allen) Korinek of Breckenridge, MN, Jean Merrick of Baltimore, MD, Jim (Patricia Camacho) Lechleiter of San Antonio, TX, John (Josephine) Lechleiter of Gloucester, MA and Kathleen Lechleiter (Rolf Haarstad) of Baltimore, MD; his 9 grandchildren and 6 great-grandchildren; his sister Edna Onchuck;and several nieces and nephews.
Don was preceded in death by his parents John and Minnie; his wife Ruth (January 3, 2008); his brother John; and 2 sisters, Mildred McCombs and Gladys Pazdernik
To order memorial trees or send flowers to the family in memory of Donald Lechleiter, please visit our flower store.