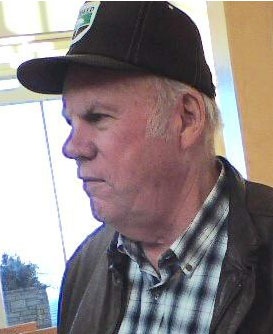 Donn David Steenbock, 77, of Campbell, MN, passed away on Friday, October 2, 2015, at CHI St. Francis in Breckenridge, MN, under the care of Riveredge Hospice. The visitation will be from 5:00 to 7:00 PM with a prayer service at 7:00, on Sunday, October 4, at Joseph Vertin & Sons Funeral Home in Breckenridge. The visitation will continue at Grace Lutheran Church in Breckenridge, on Monday, October 5, from 10:00 to 11:00 AM, followed by the funeral service at 11:00 AM. Pastor Anthony Ahrendt will be officiating. Interment will be at Campbell Riverside Cemetery.
Donn was born on October 5, 1937 in Fergus Falls, MN, the only child of Hans and Myrtle (Anderson) Steenbock. He grew up on a farm five miles east of Campbell and attended the Campbell then Tintah Elementary Schools and graduated in 1955 from Campbell High School. Following high school, Donn attended two years at North Dakota State School of Science in Wahpeton, ND. He then entered the US Army where he "learned about life." Upon his discharge from the army, Donn returned to Campbell and purchased the Corner Bar and drove school bus for the Campbell school district. On June 11, 1966, Donn was united in marriage to Florie Culp at the Congregational Church in Campbell.
Donn transitioned into farming and was one of the pioneers of the sugar beet industry in this area. Though Donn was strongly drawn to farming, he had a passion for serving the people of Campbell. He served as the Mayor for over 25 years and devoted more than 60 years as a Campbell firefighter. He was a second-generation firefighter and was very proud when his son joined the department as a third-generation fireman. His most rewarding legacy is the work he and his 'brothers' on the fire department were able to accomplish. He worked tirelessly to acquire the needed fire trucks and equipment. He also dedicated many hours toward building the Campbell Community Center. In addition, Donn was the sextant at the Campbell Riverside Cemetery.
Donn is survived by his wife, Florie; his two children, Jason (Heather) Steenbock of Campbell, MN and their daughters, Kylee and Jordan; Carma (Doug) Holmstrom of Fargo, ND and their son Landon. He was preceded in death by his parents, Hans and Myrtle.
To order memorial trees or send flowers to the family in memory of Donn Steenbock, please visit our flower store.