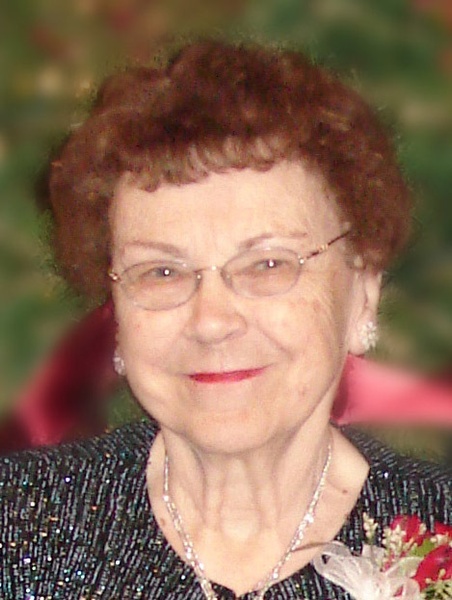 Donna Jean Nordick, 83, of Breckenridge, MN, passed away peacefully and surrounded by her family, on June 30, 2015, at Sanford Hospital in Fargo, ND. The visitation will be on Thursday, July 2, at Joseph Vertin & Sons Funeral Home in Breckenridge, from 5:00 to 8:00 PM, with a Christian Mother's Rosary at 6:30 and a prayer service at 7:00. The visitation will continue at the funeral home from 9:00 to 10:00 AM on Friday, July 3, followed by the Mass of Christian Burial at 10:00 AM, at St. Mary's Catholic Church in Breckenridge. The interment will be at St. Joseph's Catholic Cemetery near Brushvale, MN.
Donna Adams was born in Breckenridge, on September 10, 1931, the only child of Charles and Mary (Kosek) Adams. She grew up and attended school in Breckenridge, graduating from high school in 1949. She then was employed as a dental assistant for Dr. Young in Breckenridge. On October 29, 1952, Donna was united in marriage to Donald Nordick at St. Adalbert's Catholic Church in Wahpeton, ND. They began their life together on a farm near Brushvale, and were blessed with six children. Donald passed away on August 30, 1968. On December 28, 1973, Donna was united in marriage to Whitey Nordick, at St. Joseph Catholic Church in Brushvale. They continued to live on the family farm until 1997 when they moved into Breckenridge. After Whitey passed away on June 27, 2013, Donna continued to live in Breckenridge.
Donna was a compassionate woman who used the hardships she experienced in life to help and serve others. As a hospice and bereavement volunteer, she held the hand of many who were walking the same journey as she had walked. Donna was a dedicated wife and mother and modeled a strong faith and devotion to the rosary. She had cultivated many friendships during her 83 years, but there was a special place in her heart for her bowling league buddies. She enjoyed knitting, crossword and jigsaw puzzles, playing cards, and gardening. She experienced much gratification in volunteering and helping others, whether it was with hospice, the ladies auxiliary, or at the church. She was an avid reader and an enthusiastic MN Twins fan. Donna's crowning glory and greatest joy was her family.
Donna is survived by her children, Janelle (John) Lotzer of Milnor, ND, Jackie (Kevin) Schneider of Windsor, CO, Sue (Dan) Nordick of Breckenridge, MN, Cindy (Ken) Gilles of Glyndon, MN; Pat (Deb) Nordick of Perham, MN and Gary (Jackie) Nordick of Waconia, MN; 13 grandchildren and 10 great- grandchildren. She is preceded in death by her parents, Charles and Mary; her first husband, Donald Nordick; and her second husband, Whitey Nordick.
To order memorial trees or send flowers to the family in memory of Donna Nordick, please visit our flower store.