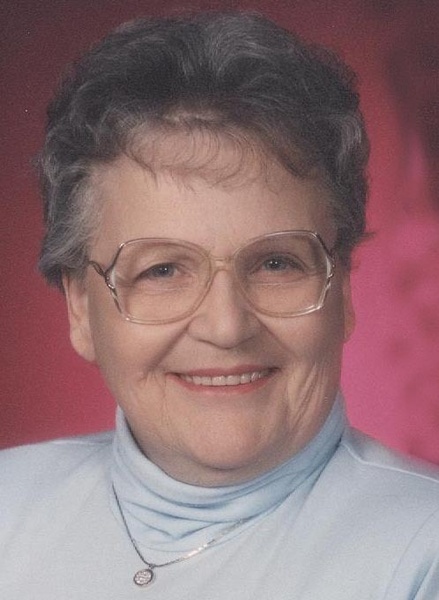 Donna Mary Gripentrog was born January 21, 1930 to Alvin and Mabel (Marik) Gripentrog near Great Bend, ND, where she grew up and attended country school. She graduated high school from Wahpeton, ND in 1947. After graduation, Donna moved to San Francisco, CA for one year and then returned to the area. Donna was united in marriage to Wesley Rittenhouse on October 7, 1950 in Wahpeton, ND. The couple made their home in Breckenridge, where they raised their seven children. While Donna devoted her heart to raising their children, Wesley worked tirelessly for the Great Northern railroad for 43 years. Together, they treasured following their children in sporting events. They received "Fan of the Year" awards for their pride and dedication to Cowboy sports. Donna was a very active member in St. Mary's Church and in the Guild. Wes preceded her in death on February 4, 1996. She continued to live in Breckenridge among friends and family until moving to Sioux Falls in November of 2000. Family was always an unwavering priority for Donna and nothing mattered more than spending time with them and just enjoying their company.
Donna is survived by her children, Steve Rittenhouse of Los Angeles, CA, Joe (special friend, Debbie Pechanec) Rittenhouse of Boise, ID, Mark Rittenhouse of Breckenridge, MN, John (Astrid) Rittenhouse of Luverne, MN, Tom (Kristie) Rittenhouse of Breckenridge, MN, Kathleen (Robert) Renner, of Sioux Falls, SD; her 14 grandchildren and 5 great-grandchildren; her three brothers, Mike(Darlene) Gripentrog of Stillwater, MN, Brian (Joan) Gripentrog of Cedar Park, TX, and Tom (Mary Buell) Gripentrog of Dassel, MN; her sister, Pat (Red) Schmitt of Alexandria, MN; and several nieces and nephews.
Donna is preceded in death by her parents, Alvin and Mabel; her husband, Wesley; and her daughter, Jane Johnson; her brothers, Duane, David and Darryl; and her sisters, Darleen and Dolores.
To order memorial trees or send flowers to the family in memory of Donna Rittenhouse, please visit our flower store.