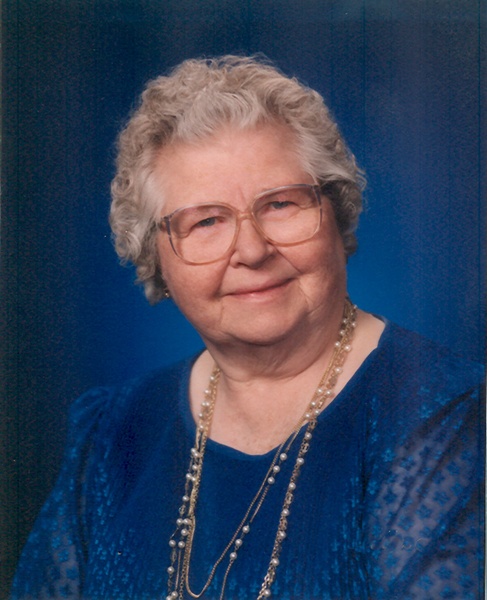 Dorothy Marohl, 97 of Breckenridge, MN passed away at St. Francis Nursing Home on March 19, 2011. The funeral is Tuesday, March 22, 2011 at 11:00 am at Immanuel Lutheran Church, Wahpeton, ND. Officiating is Rev. Morris Stephens. The visitation is Monday, March 21 from 4:00pm to 7:00pm with a prayer service at 7:00 pm at Joseph Vertin & Sons Funeral Home, Breckenridge, MN. There will also be visitation one hour prior to the funeral at the church. Interment is at Immanuel Lutheran Cemetery, Lidgerwood, ND in the spring.
Dorothy Marie Louise Gruenberg was born on August 22, 1913 in Nordick Township, near Kent, MN, the first of eleven children born to Herman and Clara (Mittendorf) Gruenberg. She grew up on the home farm and attended country school. At her cousin's wedding in Lidgerwood, ND, she met Erhart Marohl. Dorothy and Erhart were united in marriage on October 18, 1934 at Christ Lutheran Church in rural Wolverton, MN. The couple farmed near Lidgerwood, ND for ten years.
Erhart preceded her in death on January 9, 1960. Shortly after he died Dorothy began cleaning at the Vertin Furniture Store, later known as Caspers Furniture in Wahpeton, ND. She cleaned and worked for them in the mornings for the next nineteen years. In the afternoons Dorothy cleaned for other people around town, and some evenings cleaned at NDSCS.
Dorothy continued living in Breckenridge. She lived at the Park Manor for fifteen years and at Apple Tree Court for four years before becoming a resident of St. Francis Home in 2008.
Dorothy loved her family dearly and always enjoyed family get–togethers, especially Christmas and birthdays. She enjoyed passing time making quilts, sewing, doing embroidery, gardening and arranging flowers. She made quilts for all of her children, grandchildren and great-grandchildren and baby quilts for the great-great grandchildren. She was a member of Immanuel Lutheran Church in Wahpeton, where she sang in the choir, taught Sunday school and was active with LWML.
Dorothy is survived by her sons Roy (Margaret) Marohl, Breckenridge, MN; Charles (Kathy) Marohl, Minneapolis, MN; her daughter-in-law: Shirley Marohl, Wahpeton, ND; her son-in-law Edward Meyer; her brother Louis Gruenberg, Moorhead, MN; her sister Florence (Ray) Froslie, Barnesville, MN; 16 Grandchildren; 33 great-grandchildren and 7 great-great grandchildren
Dorothy is preceded in death by her parents Herman and Clara Gruenberg; her husband Erhart Marohl; her sons Donald Marohl in infancy and Duane Marohl; her daughter Donna Meyer; her grandson David Alan Meyer; her sisters Loretta Plummer, Evelyn Marohl, Lavonne Gruenberg; her brothers Alvin, Aloysius "A.W.," Robert, Harold, and Leonard Gruenberg.
To order memorial trees or send flowers to the family in memory of Dorothy Marohl, please visit our flower store.