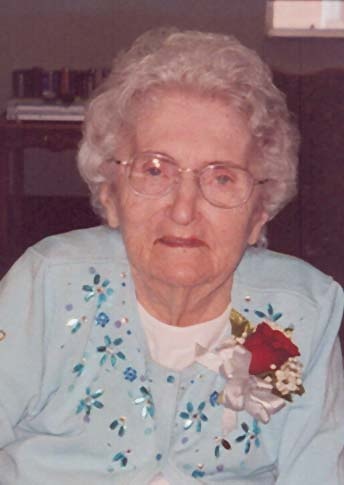 Dorothy M. Sethre, 102 of Breckenridge, MN passed away at St. Catherine's Living Center, Wahpeton, ND on November 16, 2010 surrounded by her family. The funeral is Tuesday, November 23, 2010 at 11:00 am at Breckenridge Lutheran Church. Officiating is Pastor Mark Manning. The visitation is Monday, November 22, 2010 at Joseph Vertin & Sons Funeral Home from 5-7 pm with a prayer service at 7. Interment is at Hedemarken Lutheran Cemetery in Carlisle, MN. Pallbearers are Bob Muellenbach, Steve Muellenbach, Gary Score, John Sikorski, Harley Swanson, Don Voss, Maynard Walvatne, Obert Walvatne, Glenn Sethre
Dorothy was born to Alfred and Rose (Luethy) Scheidegger in Rhinelander, WI on January 26, 1908. She lived and attended schools there until the age of 11 when she moved to Fairmount, ND with her family. She continued her education in Fairmount, graduating from high school in 1925. She then attended teacher training in Fergus Falls, MN for one year. Dorothy taught for two years in Ottertail County. On October 2, 1928, Dorothy was united in marriage to Leonard Sethre in Fairmount, ND. They made their home and started their family in Carlisle, MN. In 1940 they moved back to Fairmount and then in 1973 they moved to Breckenridge, MN
Dorothy served as a 4-H leader for many years and treasured her years as a Sunday school teacher at First Lutheran Church in Fairmount. She attached importance to tutoring students to ensure their success in school. She enjoyed baking and traveling, and always looked forward to accompanying Leonard on his musical commitments. Dorothy and Leonard were married for 77 years prior to his death in 2005. She entered St. Catherine's Living Center in 2005 where she remained until her passing.
Dorothy is survived by her daughter Joyce (Harvey) Brause of Fergus Falls, MN; her sons LeRoy (Julie) Sethre of Breckenridge, MN and Russel (Kathleen) Sethre of Fergus Falls, MN; 9 grandchildren, 18 great-grandchildren, 14 great-great grandchildren.
Dorothy is preceded by her parents Alfred and Rose (Luethy) Scheidegger
To order memorial trees or send flowers to the family in memory of Dorothy Sethre, please visit our flower store.