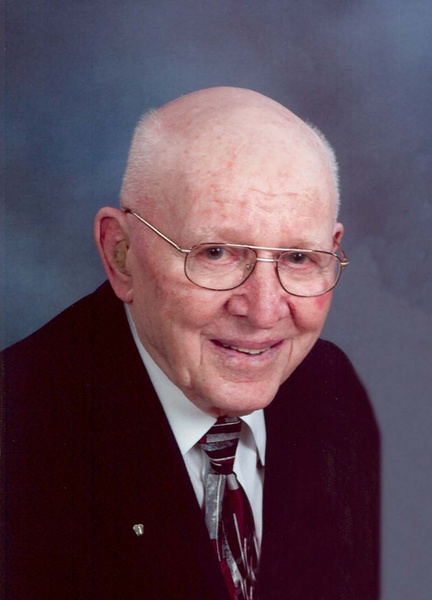 Edwin Joseph Braun was born December 26, 1920, at White Rock, SD to Henry and Mary (Kraus) Braun. He attended Moreland School through the 8th grade and then farmed with his dad and brothers. In March, 1945, he entered the Navy, where on the first day he met his best friend and future brother-in-law, Kenny Anderson. He was discharged from the Navy in July, 1946. Edwin was united in marriage to Gertrude Ann Mooney on October 2, 1947 in Hillsboro, ND. The couple made their home near Breckenridge where they farmed and raised their ten children. Edwin retired from farming in 1982 and they moved to a home near Pelican Rapids, MN. In July, 2006, they moved back to Breckenridge to have their retirement home built that they moved into in January, 2007.

Edwin enjoyed fishing, snowmobiling, photography, woodworking, and was an avid reader. He was a do-it-yourself carpenter and repairman and helped build the current St. Mary's Church in Breckenridge. Ed served on the Breckenridge Township Board for over 30 years, was a member of the Catholic Order of Foresters, served as a church usher and put in countless volunteer hours at both St. Mary's Church in Breckenridge and St. Leonard's Catholic Church in Pelican Rapids, MN. He had a very keen memory and loved storytelling, especially about his Navy days and other life experiences. He also loved to visit with anyone, for to him, no one was a stranger for long. Edwin's greatest enjoyment came from time he spent with his family.

To order memorial trees or send flowers to the family in memory of Edwin Braun, please visit our flower store.