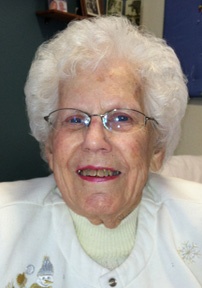 The heavenly choir became one voice stronger February 22, 2013, when Eileen Joyce Younger, 87, of Fargo, ND, formerly of Breckenridge, MN, passed away peacefully while surrounded by her family. Her funeral is Tuesday Feb. 26, 2013 at 2:00PM at Vukku Lutheran Church, rural Doran, MN. Her visitation is Monday Feb. 25, 2013 at Joseph Vertin & Sons Funeral Home, Breckenridge, MN from 5:00 – 8:00 with a 7:00PM prayer service. There will also be a visitation 1 hour prior to the funeral at the church. Pastor John Andrews will be officiating. The interment is at Vukku Church Cemetery.
Eileen was born July 13, 1925 to Frank and Blanche (Erickson) Funkhouser in Fergus Falls, MN. Eileen was baptized and confirmed at Vukku Lutheran Church. She grew up and attended school in Campbell, MN, graduating in 1943. After graduation, she worked at Gambles in Fergus Falls. She also worked at J.C. Penny's for 10 years. On December 20, 1947 she married her 4-H singing partner and High School sweetheart, Burton Younger in Dalton, MN. The couple made their home on the family farm near Campbell, MN. Burt retired from farming in 1986, but continued living on the farm until 1997, when they moved to Breckenridge. Burt passed away October 9, 2009.
Eileen was never one to sit idle for very long and subsequently was involved in many activities including Vukku Sunday School teacher, 4-H, Luther League, Riveredge Hospice, and the Wahpeton Eagles Auxiliary & Memorial Team. She held many officer positions including PTA, Band Mothers, Vukku Ladies Aide, Homemakers, Musical Arts, and Sons of Norway. She was a great cook and no one ever left the house without a hot meal, lunch, coffee, or something to eat. She baked many items for the Wilkin County Fair every year and won many blue ribbons. She will be sadly missed by her family and friends.
Eileen is survived by 3 daughters, Deborah (Kent) Roesler of Leonard, ND, Denise (Jeffrey) Labrensz of Sheyenne, ND, and Dawn (Dan) Elton of Moorhead, MN; her grandchildren, Ryan (Julie) Anderson, Melissa (Vern) Rossman, Allison (Matt) Pfeiffer, Charia Anderson, Lindsey Anderson and Alleise Anderson; her great-grandchildren, Lauren and Levi Rossman and Ryne and Bryce Anderson;her brothers, Donald (Betty) Funkhouser, Curtis (Gloria) Funkhouser, and Neal (Barb) Funkhouser; her sisters, June (John) Quam, and Carol (Wayne) Brendefur and many nieces and nephews.
Eileen was preceded in death by her parents Frank and Blanche Funkhouser, her husband Burton; her son-in-law, Jack Anderson; her grandson, Aaron Labrensz, her infant sister Lorraine and her brother-in-law Glen Herman.
To order memorial trees or send flowers to the family in memory of Eileen Younger, please visit our flower store.