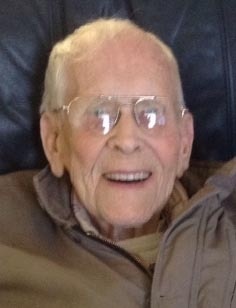 Elder Clayton Elroy Hanson was born on October 22, 1922, in McCloud, North Dakota, to Erick and Emma (Banken) Hanson. Elder attended school in Wahpeton, ND, and graduated high school in 1941. He then attended North Dakota School of Science in Wahpeton for two years; during which time he worked for local farmers. In February of 1943, Elder entered the Army and served in California and Japan. During his time of service, he attended the University of Oklahoma for engineering.

Upon his honorable discharge from the Army, Elder moved to Milan, Illinois and began working for John Deere in Moline, Illinois, of which he retired after 26 years of employment. He continued to live in Milan, until recently moving to Breckenridge.

Elder was a "tinkerer"; he enjoyed working on small engine repairs, woodworking, and finding treasures with metal detecting.

Elder was preceded in death by his Parents, Erick and Emma; his sisters, Ruth (James) Adams; Fern Lindell; Brother, E. Charles Hanson; and two nephews-in-law, Dean Carlson, and Dennis Baldwin.
To order memorial trees or send flowers to the family in memory of Elder Hanson, please visit our flower store.