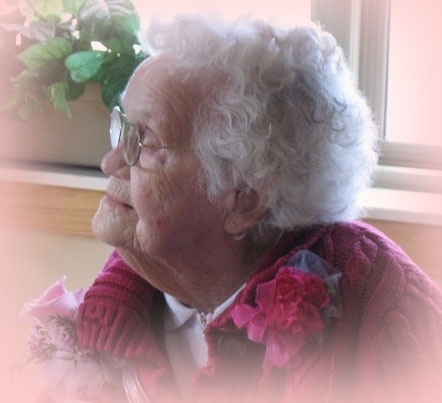 Eleanor began her life in Tintah, MN as the daughter of Oliver and Alice Tucker.           She started her schooling in Tintah but attended her last two years of high school at St. Benedict’s in St. Joseph, MN where she graduated. Eleanor pursued her chosen vocation of nursing at St. John’s School of Nursing in Fargo, ND where she received her degree as a Registered Nurse. After finishing her college education, Eleanor married John Glock at St. Gall’s Catholic Church in Tintah. They began their life together on the Glock family farm near Tenney, MN. As one, they raised their four children and managed the farm. Eleanor worked as a nurse at St. John’s in Fargo then at the hospital in Wahpeton, ND. John preceded Eleanor on November 7, 1984. She continued to live on the farm until 2003, when she entered St. Francis Nursing Home.

Eleanor’s first love was her family. She was a care giver, not just in her career as a nurse, but it was in her character to nurture and love. She took care of her parents as they grew older and her daughter Catherine until she entered the nursing home in 2000. In her spare time, Eleanor enjoyed playing cards and spent many happy hours in the kitchen. She was a terrific cook. She took pleasure in starting her day early to watch the sun rise.

To order memorial trees or send flowers to the family in memory of Eleanor Glock, please visit our flower store.