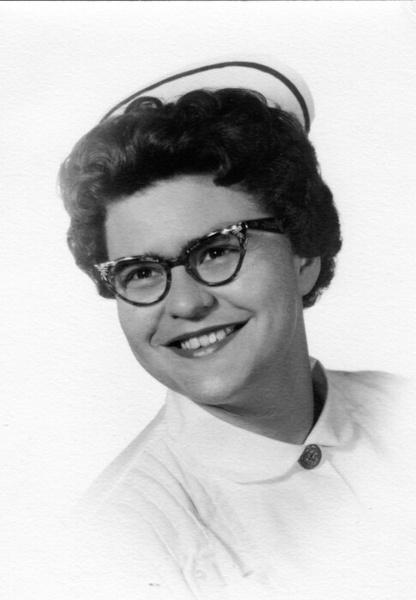 The Ellen Pazdernik family kindly request that all attendees wear masks and practice social distancing at the services.

Ellen Mary Henger was born on August 14, 1939, the younger daughter of Linus and Valeria (Hermes) Henger of Mooreton, North Dakota. She grew up there and graduated from the St. Francis School of Nursing in Breckenridge in 1960, becoming a Registered Nurse and joining the staff at the hospital. Raising a family and the effects of a serious automobile accident led her away from those roles. She later taught Health Occupations at the Wahpeton Vocational School.

In 1960, she married George Pazdernik of Breckenridge. Together, they operated the family farm homesteaded by George's grandfather in 1875, where they raised their son, Charles (Chuck), and daughter, Lisa. She was an avid gardener, an accomplished baker and an adventuresome cook, and a skillful seamstress and quilter.

Throughout her life, Ellen was active in many volunteer and leadership roles in the church and the community. These included, in St. Mary's Church, service on the decorating committee, the Christian Mothers Guild, and the Catholic Order of Foresters. Community roles often mirrored her children's activities, including Wilkin County 4-H, volunteering in the library at St. Mary's School and the Breckenridge Public Schools, and assistant coaching the Breckenridge High School Declamation team. Later in life, she was actively involved in leading the Veterans of Foreign Wars Auxiliary, honoring George's service as a veteran of World War II.

She will be dearly missed by her daughter, Lisa Pazdernik; her son, Charles Pazdernik, his spouse, Miriam Aukerman, and their daughters Thea Pazdernik and Cara Pazdernik. She is preceded in death by her husband, George Pazdernik, and her parents Linus and Valeria Henger.

In lieu of flowers and memorials, donations can be made to St. Mary’s Catholic School in Breckenridge.

To order memorial trees or send flowers to the family in memory of Ellen Pazdernik, please visit our flower store.