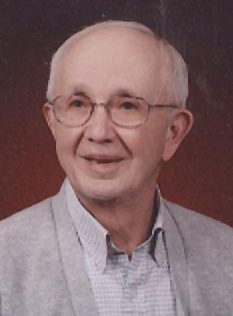 Elroy Charles Korth, 93, of Morris, MN, formally of Breckenridge, MN, passed away Wednesday, July 23, 2014, at West Wind Village in Morris. The visitation will be from 5:00 to 8:00PM, with a prayer service at 7:00, on Monday, July 28, at Joseph Vertin & Sons Funeral Home in Breckenridge. The visitation will continue on Tuesday, July 29 from 10:00 to 11:00AM at the funeral home followed by an 11:00AM Celebration of Life funeral service in the chapel. Pastor Mark Manning will be officiating. The interment will be at Fairview Memorial Gardens in Wahpeton, ND.
Elroy was born on April 11, 1921, in Hankinson, ND, one of nine children born to Charles and Minna (Hartleben) Korth. He grew up and attended school in Hankinson, graduating high school in 1939. He worked in the Civilian Conservation Corps for six months. In 1942, he joined the U.S. Army Air Force and proudly served his country during WW II, completing tours in Normandy, France, Rhineland, and Ardennes. He was honorably discharged in 1945. After his military service, Elroy attended NDSSS in Wahpeton, ND, and graduated in 1948 from the Auto Mechanics program. He married the love of his life, Anna Lislegard, on May 8, 1949, in Wahpeton, ND. He got his start as an auto mechanic at Kuch Motors, then at Wing Pontiac, both in Breckenridge. Subsequently, he began working for Jack Reed Chevrolet in Wahpeton, which was eventually acquired by Smith Motors. By the time Elroy retired in 1985, he had been a dedicated employee of Smith Motors for over 30 years. Following his retirement, he and Ann made many precious memories as they enjoyed traveling all over the United States in their RV.
Elroy was a lifetime member of the Breckenridge American Legion Post 53, a devoted husband of 49 years (Ann preceded him in death on 4-9-1999), loving father of five children, and hard-working man of integrity and grit. He loved the tranquility of fishing and gardening; and enjoyed the challenge of woodworking and fixing anything that wasn't working as it was designed to.
Elroy is survived by his five children, Larry (Mary) Korth of Davenport, FL, Tom (Joyce) Korth of Rapid City, SD, Mike (Sandy) Korth of Morris, MN, Steve (Julie) Korth of Green Bay, WI, and Debra (Jeff) Grawe of Aurora, CO; his sisters, Marion Blecha of Olympia, WA, Betty Collins of Renton, WA, Evelyn Fredrickson of Miami, FL, Wilma (Bob) Lawler of Auburn, WA, and Vonnie (Ulrich) Mettler of Vancouver, WA; 13 grandchildren; several great-grandchildren; and one great-great grandson. Elroy was preceded in death by his parents, Charles and Minna; his wife, Ann; his sisters, Lorraine Frederick and Verona Korth; and his brother Wilbert Korth.
To order memorial trees or send flowers to the family in memory of Elroy Korth, please visit our flower store.